Book Review of Empire Betryaed: The Fall of Sejanus

In 29 A.D., Emperor Tiberius Caesar, living in self-imposed exile on the Isle of Capri, entrusts his Praetorian Prefect, Lucius Aelius Sejanus, with the administration of the vast Roman Empire. Under Sejanus’ iron fist, and unbeknownst to Tiberius, the ranks of the Senate and equites are subsequently purged of the Praetorian’s enemies. Treason trials, once prohibited in Rome, have become commonplace as Sejanus relentlessly punishes any who would defy him in his quest for power.

After many years of commanding the cavalry of the Army of the Rhine, Tribune Aulus Nautius Cursor at last returns to Rome, amidst the turmoil. Two years later is elected as a Tribune of the Plebs; the representatives of the people who hold the power of veto over the Senate. It is Cursor who discovers Sejanus’ sinister plans; that he seeks to overthrow Tiberius and name himself Emperor.

Duty bound to save the Empire from falling further under a tyrannical usurper, Cursor resolves to unravel the conspiracy and bring the perpetrators to justice. Aiding him is an old friend; a retired Master Centurion named Gaius Calvinus. Regrettably, they know that if successful, Tiberius’ retribution will be swift and brutal, sparing neither the innocent nor the guilty. This leaves only two dark paths for Cursor and Calvinus; either allow the pending reign of terror under a ruthless usurper, or unleash the unholy vengeance of an Emperor betrayed. 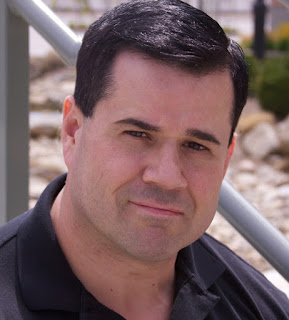 Born in Edmonds, Washington, author James Mace is currently a resident of Meridian, Idaho. He enlisted in the United States Air Force out of high school; three years later transferring over to the U.S. Army. After a career as a Soldier that included deploying to Iraq, in 2011 he left his full-time position with the Army National Guard to devote himself to writing.

The sun had just started to break over the hills to the east as the Eternal City came into view. The well-worn road the small group travelled on was known as the Via Aurelia, or Aurelian Way. It was nearly three hundred years old and served as the main thoroughfare from Rome to the west coast of Italia. At the head of the entourage rode a man dressed in a Tribune’s armor, complete with muscled breastplate, with white leather trappings, a dark red cloak, and an ornate helmet, decorated with a lion’s head on the crown and with a magnificent red crest running front-to-back. Far from being just ceremonial, his armor had seen battle on many occasions, and even constant polishing and buffing could not eliminate the scouring from the blows of countless enemy weapons.
His name was Aulus Nautius Cursor. Taller than most men, he had a pronounced nose that was common among many of the nobility, though it was devoid of the aquiline hook. His frame was lean and more designed for speed and agility, rather than brute power. Having gone completely bald at a young age, the padded skull cap beneath his helmet was doubly important. Now in his late thirties, he’d spent nearly twenty years as a military Tribune with the Army of the Rhine; substantially longer than many of his peers. All members of the lesser-nobles of the Roman Empire, known as the Equites, were required to perform a minimum of six months with the legions. Though many stayed on longer than the compulsory time required, especially if other political or magisterial postings proved scarce, few ever made the army their primary career path. Being neither legionaries from the ranks, nor with ever having any opportunity to command legions as legates, Tribunes were confined to mostly staff duties. If one were lucky, he’d get command of a cohort of auxiliaries; the non-citizens who augmented the Roman Army with the promise of being awarded citizenship after twenty-five years of service.
For Cursor, his path had been much different. Though his name literally meant ‘runner’, and he was indeed quite nimble and fast on his feet, his true skill lay in horsemanship. His riding skills, plus natural ability for coordinating large bodies of fighting men, led to his assignment as a cavalry officer, under the tutelage of the now-legendary Commander Julius Indus. He’d also done his mandatory time as a staff officer, and was fortunate enough to have served directly under the late great, Germanicus Caesar. During the wars against the Germanic Alliance, following the disastrous ambush in Teutoburger Wald, Germanicus had demanded that all of his officers would first and foremost lead their men by their own example. In one of the few times he ever fought on foot, Cursor had accompanied his commanding general during the assault on a barbarian stronghold at Angrivarii; a terrible battle which thankfully brought the wars to an end.
Despite the accolades given to him for his bravery at Angrivarii, it was with the cavalry that the Tribune excelled, and it was following a rebellion in Gaul that he was given command of all mounted forces within the Rhine army. This was expanded even further during the Frisian Rebellion, when Cursor was handed operational control over all auxiliary forces during the campaign. With a force of ten thousand men, he had more soldiers under his charge than even the senatorial Legates who commanded the legions. It was at the Battle of Braduhenna that Cursor achieved his greatest glory, though he personally viewed it as his utmost tragedy.

“We’ve been away for far too long,” his wife, Adela Theodora, said as the city came into view over the horizon. The River Tiber stretched before them, running north to south. Just beyond was the Campus Martius, also known as the Field of Mars. A plethora of foreign temples and cults were housed here, as it also served as a place to greet dignitaries who could not for cultural reasons pass into the city proper. The most dominating feature of this district was the massive Baths of Agrippa. Beyond the field was the Capitoline; one of the famous Seven Hills that dominated Rome. The magnificent Temple of Jupiter rose from atop this hill and accented the skyline.
“To be honest, my love,” Cursor replied, “It was on the Rhine, leading my regiments, that I felt most alive.”
“And if you were still there, we should remain unmarried,” his wife replied.
“Ours was indeed an unusual courtship,” Cursor chuckled. Though arranged in the traditional sense by contract between Cursor and Adela’s father, Theodorus, Adela herself had adamantly refused to follow through with the marriage as long as Cursor was still leading men into battle.

The Tribune’s next memory came from later that afternoon. The survivors of the Twentieth Legion, still looking battered and filthy, were standing in formation. In a reversal of protocol, all officers stood at the back. Posted in front of the mass of legionaries was a young soldier, who appeared to be all of seventeen. In his hands was a crown made of grass and weeds, taken from the trampled field of battle. Though most awards presented to Roman soldiers were made of gold or silver, the two most prestigious came from the humble earth. The Civic Crown, awarded for saving the life of a fellow soldier or citizen, was made of oak leaves instead of gold, as it was reasoned that a gold crown would be putting a price on human life. The crown held by the young legionary was of an even greater honor, and was for saving not just one life, but an entire legion. It was also the only award that was presented by the men in the ranks, by universal acclamation. It was so prestigious and rare that it had not been awarded to any soldier for at least a couple of generations.
“Tribune Aulus Nautius Cursor,” the legionary spoke, “It is by your actions in leading your ten thousand forty miles in a single day, flanking the Frisian army, and killing the enemy King that you have saved the Valeria Legion from being wiped out of existence. It is by universal acclamation of the men of the Twentieth that we present you Rome’s most sacred honor, the Grass Crown.”
The Tribune removed his helmet, tucking it under his left arm, and bowed his head slightly as the legionary placed the crown on his bald head. The soldier then drew his gladius and turned to face the legion.
“Twentieth Legion!” he shouted. “Gladius…draw!”
“Rah!” responded the host of legionaries, who had been deathly silent to this point, as their weapons flew from their scabbards.
“Salute!”
“Ave Cursor, savior of Valeria!”
Adela’s eyes grew wet as she watched her husband go through his somber ritual. Though the Battle of Braduhenna, which had taken place just east of the River Rhine, was a Roman victory, it was regarded as an unmitigated disaster. It was well known throughout the Empire that Cursor was awarded the Grass Crown, yet many of Rome’s nobles resented him for it. It was viewed by some as dishonorable that the legionaries of the Twentieth Valeria had taken the initiative to honor him for saving their lives. Cursor had certainly never asked to be awarded for his actions, and in fact avoided any mentioning of what happened that dark day.
Soon after the ceremony, he had spoken with Centurion Artorius, who had watched from a distance, being unable to stand and wearing only a loin cloth and a large bandage over his badly injured side. Cursor had told the Centurion that it felt more like a crown of lead than of grass.
“It is a heavy burden you now bear,” Artorius had replied. “But know that your place in history is well earned.”

Whatever his thoughts were about the heavy burden the Grass Crown brought to him, he kept it with him as a sacred possession, in honor of those who died at Braduhenna. Adela watched as her husband took a small pitcher of water and lightly sprinkled a few drops over the crown to keep it moist and from becoming brittle. He then closed his eyes, placed the crown to his lips, and set it reverently back into its box. Adela watched for a moment longer as he closed the lid and bowed his head, eyes still closed. She had never seen him go through this ritual before, and wondered how often he performed it, or if this was the first time. What she did know, and it broke her heart to come to this understanding, was that the man she loved had had his very soul broken on that horrible battlefield, fighting in a terrible war that would later be regarded as unjustified; the magistrate who brought it about being personally executed by the Emperor himself. The hardest thing for Adela Theodora to accept was that the pain Cursor bore would always be there, and there was nothing she could do to ever ease it.

This is an excellent book to get a personal view of the history of Rome around the time of Christ.  It focuses on one man who fought for Rome and earned his place in the upper class by virtue of his honor.  It is, however, very much like reading a history tome with personal vignettes inserted to help the history lesson. I enjoy reading historical fiction, but this is not generally a time period that I focus on.  I enjoyed the story, but I don’t know that it is one that I would naturally pick up to read simply because I prefer to read European and English historical novels.  Roman literature has never been my forte.