Book Review of Change of Address

Book Review of Change of Address by Natalie-Nicole Bates 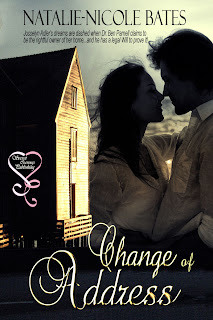 Saved from a traumatic past and successful in her present as a home care nurse, Josselyn Adler’s dream of home ownership in the idyllic town of Unity are dashed to pieces when Dr Ben Parnell, a cancer specialist, shows up on her doorstep claiming to be the rightful owner of the house—and Ben has a will to prove it!  To Josselyn, the house represents a new start in her life. With a stable home, hopefully a much wanted family wouldn’t be far behind.

After a near career-ending allegation is made, Ben has returned home to lick his wounds. But now he must prove Josselyn’s claim to be a fake, that she used her position as a live-in nurse to his sick father to ingratiate herself into his good graces. But as he gets to know her, he can tell by her shy, often standoffish behavior, that Josselyn is a woman who has been deeply hurt in her past. Although he is attracted to the dark haired beauty that has invaded his life, he is still suspicious of her true motives and her past involvement with his father.

Natalie-Nicole Bates is a book reviewer and author.
Her passions in life include books and hockey along with Victorian and Edwardian era photography. Natalie contributes her uncharacteristic love of hockey to being born in Russia.
She currently resides in the UK where she is working on her next book and adding to her collection of 19th century post-mortem photos.
Visit Natalie-Nicole online at www.natalienicolebates.com

When she arrived at the foot of the stairs, the front door rattled. Fear, cold and stark, rose up in her throat and choked her as she heard the lock snap and watched, rooted to the floor, the creaky old door jiggle in its frame. The anticipation mingled with fright, produced a potent, sick feeling churning inside her like the bad horror movie she’d recently viewed on late-night cable television.

After what seemed an eternity, the door flung open. The first thought entering her brain was a ghost had entered her home. A younger, blonder visage of Morgan stood in the threshold. Before she could utter his name, a second, more coherent thought followed; a ghost wouldn’t use a key.

The man in the doorway took one step inside and stopped abruptly, clenched his jaw, and stared. The familiar stranger invading her new home could only be one person.

“Well, we know who I am. Now who the hell are you, and why are you trespassing in my house?”

“Your house?” she asked with disbelief. “This is my home. Morgan gave it to me!”

“I don’t know who you are, lady, but I suggest you get a move on it. I’ll give you five minutes before I call the police.” He pointed to his platinum-cased wristwatch for emphasis.

“Don’t bother waiting.” She reached into her handbag and removed her cell phone. With shaking fingers, she punched in 911.

The line connected after the second ring. “911, what is your emergency?” asked the female dispatcher.

“My name is Josselyn Adler. I’m the new owner of 22 Little Pine Road. A man has let himself into my home and is now threatening me.” Although she was quaking on the inside, she strove to keep her voice and demeanor strong and confident.

“I have an officer on the way, Ms. Adler. Would you like to stay on the line with me until he arrives?” she offered.

As she disconnected her phone, Ben’s gaze burned into her. She wouldn’t give him the satisfaction of showing any fear. While growing up, she had dealt with her share of tormentors. One forty-year-old, blond-haired bully was not going to intimidate her or drive her from a home that was rightfully hers.

“Excuse me?” She furrowed her brow and made eye contact. Ben Parnell had his father’s glacial, blue eyes.

“Any moment one of Unity’s finest will be arriving to play knight in shining armor and save the poor maiden from the big, bad wolf.”

Before she could utter a word in reply, a black patrol car came to a screeching halt on the street. An officer threw open the car door and made long, quick strides to the house. His uniform and Unity Police Department baseball cap matched the color of his car.
A lump formed in her throat. As she was growing up, a police car in front of the house and an officer at the door meant her father was in some sort of trouble yet again.

“Good evening, Miss. I’m Officer Smith.” He looked to Ben. “It’s certainly been a long time since you’ve been around, Ben.” Not waiting for an answer from him, he turned his attention back to Josselyn. “What seems to be the problem tonight?”

He knew Ben by his first name. They looked to be about the same age, and in this small town, it was likely they knew each other growing up. Although Officer Smith seemed friendly enough, would he side with the hometown boy rather than with the stranger girl?
“This is my house. Morgan Parnell left it to me in his will. Now he...” She paused and pointed at Ben. “He thinks it’s his house.”

“I have a will, too,” Ben loudly interrupted. “And mine is legitimate!”

His deep voice vibrated through her, causing her head to ache. Flustered, she pulled an envelope from her handbag. Morgan’s attorney gave to her a copy of the will a few days earlier. She handed it to Officer Smith. To her dismay, Ben also produced a document from a briefcase.

This is very bad.

She hoped Ben had been bluffing.

Well after reading the excerpt and synopsis, I expected a typical romance novel.  Guy and girl meet, have problem, dislike each other, are forced together due to unforeseen circumstances, fall in love, and live happily ever after. Blah. So I was pleasantly surprised to see that while the story did follow the romance genera, the story was well thought out and the hero and heroine both sacrificed something for the other leading them both to realize that love with the other person’s happiness being most important is the only true happiness.

Yes, it’s a romance and they all follow a certain plot plan.  That’s what makes them romance novels, and that’s why we love them.  So yeah, I could have done without the whole “I’m damaged goods and don’t want to tell you why.  But eventually I will and we will grow closer because of it and come to realize we are meant for each other.”  That was my only major issue with the book.  The overall message was that we all have issues, but it’s okay and it helps make us the people we are today.