Book Review of So Seven Point Eight by Marie Harbon

One day FREE event May 15th 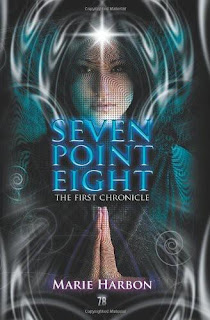 The most powerful number in the universe

The number that connects everything.

A physicist begins a quest to measure the soul but soon finds himself drawn into the world of the enigmatic Max Richardson, where research is sold to the military at the highest bid. However, he soon discovers another purpose when an extremely talented young psychic enters his life. He devises a project and builds a team to stretch the frontiers of exploration, only to make a reality-shattering discovery...

Written in the style of a TV series, The First Chronicle is the beginning of a 5 part epic which follows the spiritual and emotional journey of five people; their quest to understand the universe and our place within it.

Quantum physics meets spirituality in a tale which begins in the 1940s, unfolds during the 1960s; an era of social and spiritual transformation and reaches its conclusion in the modern age.

It interweaves the human dramas of love, betrayal, bitterness and above all, courage in a world where everyone must face their own dark shadow.

It's also highly suited to Young Adult readers, who like sci-fi along with their paranormal, or those who like a more challenging read.

Content guidance: Suitable for readers aged 15 and over. Sexual scenes are suggestive as opposed to explicit. Some references to psychedelic drugs.

Get it on Amazon

Marie Harbon has worked in both the retail and fitness industry. She has a degree in sport and fitness and taught group exercise for several years before settling into a post delivering BTEC Sport courses for two years. Since then, she has instructed dance with children and has decided to focus on writing as her main career.

She wrote her first novel length story at the age of twelve and has written on and off subsequently, evolving her style and literary maturity. ‘Seven Point Eight’ began life as a short story in the early nineties and was later developed into a full five part series of books. Work on ‘The Second Chronicle’ has already begun.

Marie has two children and lives with her son and four guitars in the town of Eastwood, Nottinghamshire, which is in England. She divides her time between writing novels and scripts, making things, teaching and being a mum. Her vice is fabric and she creates bags, corsets and clothes in the vintage and retro style.

This book has a lot of technical scientific information combined with mystical ideas.  It is a unique mix of technology and fantasy.  The story is somewhat difficult to follow as it is told from the point of view of different people, but it is not always easy to tell who is talking.
I am still unsure of my reaction to this book.  It certainly made me think.  At times I was uncomfortable; and at other times I was profoundly intrigued.  I think this is a book that I will have to re-read to fully process.
I give this book 3 out of 5 stars.

This product or book may have been distributed for review, this in no way affects my opinions or reviews.
Posted by Wall at 5:08 AM