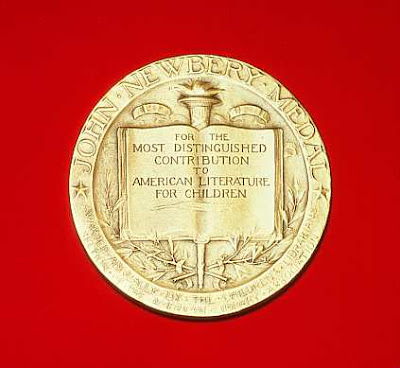 Welcome to the Newbery Project! We are reading all the books that have received the John Newbery Medal. A complete list of the medal winners is available here.

There is no time limit; registration is always open. To join, please email: imponderabiliaof at yahoo dot com. Please put Newbery Project in the Subject line and include your blog URL (if you have one) and your name as you'd like to have it appear in the Members list.

This is an on-going challenge.  The challenge is hosted by the Newbery Blog at http://newberryproject.blogspot.ca/

2004 Medal Winner:  The Tale of Despereaux: Being the Story of a Mouse, a Princess, Some Soup, and a Spool of Thread by Kate DiCamillo, illustrated by Timothy Basil Ering, (Candlewick Press)
Honor Books:

2001 Medal Winner:   A Year Down Yonder by by Richard Peck (Dial)
Honor Books:

1998 Medal Winner:   Out of the Dust by Karen Hesse (Scholastic)
Honor Books:

1985 Medal Winner: The Hero and the Crown by Robin McKinley (Greenwillow)
Honor Books: