Promises:  Book One of The Syrenka Series
By Amber Garr
Genre: fantasy/paranormal YA 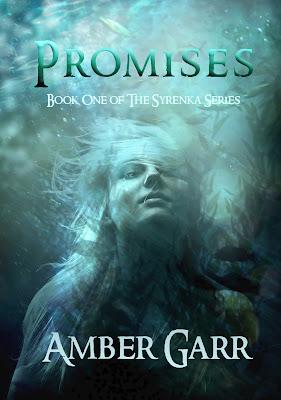 Sometimes following your heart can end up destroying the ones you love.

When seventeen-year-old Eviana Dumahl is faced with the responsibility of an arranged marriage and clan leadership, she is forced to choose between the life required of a mermaid and one of a teenage girl simply infatuated with the wrong guy. Kain, her devoted fiancé would make a wonderful husband except that she’s been in love with Brendan, a shape-shifting selkie, ever since they were kids.

Choosing to abandon her family, her clan, and her life with Kain will have dire consequences far beyond anything she could have imagined.

A war is brewing amongst the clans and Eviana unwittingly becomes a pawn in the intricate schemes of a twisted mastermind. With Brendan’s life on the line, she has no choice but to involve those who she once considered friends. Amidst encountering senseless tragedies and immense loss, Eviana discovers that she is more valuable as a clan leader than anyone ever suspected. Her survival is not only dependent upon the loyalty of her friends, but also on her acceptance of a life that she had so adamantly tried to escape. 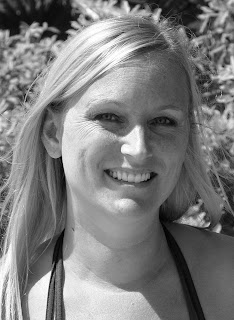 Amber Garr spends her days conducting scientific experiments and wondering if her next door neighbor is secretly a vampire.  Born in Pennsylvania, she lives in Florida with her husband and their furry kids.  Her childhood imaginary friend was a witch, Halloween is sacred, and she is certain that she has a supernatural sense of smell.  She writes both adult and young adult urban fantasies and when not obsessing over the unknown, she can be found dancing, reading, or enjoying a good movie.

I barely heard her parting words as the screen door slammed shut.  My head was spinning in desperation as the anger coursed through my bones.  “Get back in here Eviana!” she continued to scream at me.  “We are not finished with this conversation!”
I was already racing down the deck stairs towards the sandy beach, kicking off my shoes and unbuttoning my blouse.  We are for now, I thought as my blood boiled with rage and resentment.  I was going to be trapped!  How dare they?  This was not the eighteenth century anymore!  I had rights!
I stumbled onto the sand, taking just a brief moment to savor the warmth and the feeling of the grains massaging my toes.  My shirt came off and I started to unzip my jeans.  No one was around.  But I wouldn’t care anyway.  The water was calling me and it was the only voice that I could hear now.  With one pant leg off, I hopped along in my forward progression until the other one was free.  My oasis was so close now that I could taste the salt in the air.  The sun broke free of a cloud, stopping me for a moment.  It was late afternoon and the sunset was still a few hours away, but the sky was already turning multiple shades of pink and orange; the coloration reminding me of the inside of a brilliant conch shell.
I closed my eyes and took a deep breath.  I knew that there was going to be hell to pay when I returned to the house.  Marguerite, my mother, had tolerated my rebellious behavior when I was younger, giving me more freedom and second chances than anyone in our clan.  But apparently now, at seventeen, I was an adult.  Adult enough to bear children.  Adult enough to participate in clan gatherings.  Adult enough to navigate our youth through their transition period.  But not adult enough to choose who to love.
A slight breeze wafted off the ocean, bringing with it scents that filled my gut with longing.  The freedom of the ocean.  Why couldn’t I just stay there forever?  A gull called overhead, beckoning me to join him.  The splashing waves calmed my inner rage as they ebbed and flowed in a hypnotic pattern.  A distant moan of a shipping vessel reminded me of our history.  I opened my eyes to see that I was standing alone along miles of sandy beach interlaced with large rocks and cliffs emblematic of the northern California coast.  So beautiful.  I stripped off the rest of my clothes and ran into the ocean.
As soon as I was under the water, I could feel the transition begin.  My lower body ached as the bones adjusted from a life on land to one at sea.  Both legs began to fuse together and work as one.  My foot bones elongated while I prepared for the agony.  I was accustomed to the changes now, but it was still a struggle of mind over matter.  Breaking through the surface of the water, I grabbed one last breath before the final jolt of pain ravaged through my body.  I bit my bottom lip and squeezed my eyes shut willing the moment to be over.  At last I felt an electric tingle move from my hips to my toes as the hardened iridescent, scales appeared on the bottom half of my body.  I opened my eyes to find that the internal transformation was complete as well.  My vision cleared.  My lungs expanded.  I could hear for miles.  I was free.
So I swam.  I swam away from the shore and the house that I lived in.  I swam away from my fears and obligations as though they could disappear with the distance.  I would temporarily forget my responsibilities, my duties, and the argument with my mother.  In here, I wasn’t trapped.  The sea was my true home.  I was a mermaid and this was my world.

When I was a kid I always wanted to be a mermaid.  I even made my now husband watch “The Little Mermaid” with me (and we didn’t even have kids so we could pretend we were watching it for them).  I have heard a lot of stories, folktales, and myths about mermaids and read numerous stories, but never anything like this.
The detail and different mythological water creatures brought to life in this story are amazing.  The idea of mer-people living on land and changing in the sea, while not completely new, is used in a new and creative way.
I could go on and on about all the intriguing things in this story, but that would just give away too much of the story.  And trust me, this is one you have to read for yourself.
I give this 4 out of 5 stars.  A definite good read.
Posted by Wall at 5:04 AM