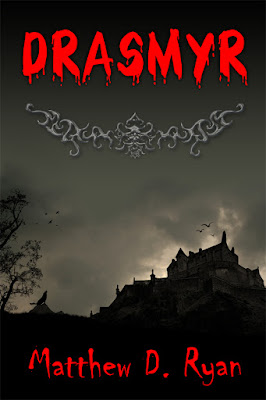 By Matthew D Ryan
In a world of wizards and vampires a clever man may make a fortune. But hunting the undead is no small task, as Coragan the bounty hunter will soon find out. He will need all his wits and the help of his comrades to succeed this time. Together, they must pit themselves against a creature so old time itself bends knee, an ancient vampire by the name of Lucian val Drasmyr. Read Drasmyr, a dark fantasy novel by Matthew D. Ryan.
We vampires do not make easy prey. Our weaknesses are few, our strengths many. Fear is something we do not know, and death but a distant memory. So tread softly, pray to your god, and gird yourself with silver when the moons arise and night’s dark prince awakens. We fear not the wizard, nor the warrior, neither rogue, nor priest; our strength is timeless, drawn from darkness and we know no master save the hot lust of our unending hunger. We long for blood, your blood and no blade, nor spell, nor clever artifice, can keep us long from our prize. Feel our teeth at your throat, your life ebb from you, and know as darkness comes to claim you that the price of your folly is your everlasting soul. 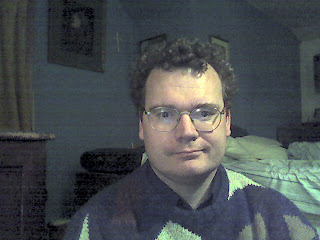 Matthew D. Ryan is a published author living in upstate New York on the shores of Lake Champlain. He has a background in philosophy, mathematics, and computer science. He also has a black belt in the martial arts and studies yoga. He has been deeply involved in the fantasy genre for most of his life as a reader, writer, and game designer. He believes he saw the legendary Lake Champlain Monster (a.k.a Champy) once and he has a cat named Confucius.
Website: http://www.matthewdryan.com
Twitter: MatthewDRyan1
Facebook: Facebook profile
LinkedIn: http://www.linkedin.com/pub/matt-ryan/34/862/877
Blog: http://www.atoasttodragons.com 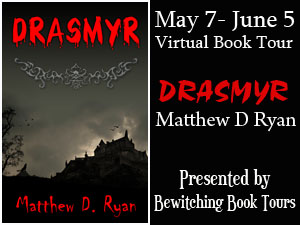 The door swings inward. A grey haired man in pale yellow robes stands in the doorway, one hand on the handle the other on the doorframe. “The master wishes not to be distur—”
Stepping forward with hands extended, I snap the man’s neck with a violent twist, then turn toward Arcalian. “Greetings, wizard.” The body drops to the floor.
With a startled yelp, Arcalian leaps back from his desk. “Lucian, you’re ali—”
“My dear friend, I have not been alive for a thousand years. You of all people should be aware of that.” I step slowly and deliberately past the robed man’s body.
With obvious effort, Arcalian regains his composure. He sinks slowly back into his chair and rests his elbows on the oak desk, his hands folded beneath his chin. The tome splayed out before him is thick and leather-bound. The oil lamp flickers in a draft and the mage’s shadow dances across the wall. “You have killed Aristoceles.”
My hand motions to the doorway. “And your guard. Their deaths amused me.”
“The guard will be easy to replace, but Aristoceles may prove more difficult.”
“Oh really, why is that? He didn’t smell particularly strong.” I fold my arms across my chest; there is no rush to kill this man. Indeed, it is enjoyable watching his discomfort grow. “What use was he to you?”
The wizard makes an explanatory gesture with his left hand. “Very little in the magical sense, he was always more interested in philosophy than the true arts of sorcery. But he was naive enough to be considerably loyal to me, and he had a knack for many things others might find difficult.”
I glance down at the crumpled body. “Philosophy? If I had known, I could have made him immortal. Many a lonely night have I spent pondering the mysteries of the universe. It might prove amusing to have someone who thinks he is learned in such affairs to talk to. Could you imagine, though, an immortal vampire wandering the world spending half his time drinking blood and the other half trying to justify his existence as a murderer of men? I’m sure the emotional turmoil would be agonizing, far more so than any caused by any one of his ridiculous paradoxes, be it on place, motion, or the meaning of time.”
“Lucian, my friend,” Arcalian says, leaning back in his chair, “you always seem to amaze me with your knowledge of things both common and obscure. Are you truly as well-read as you seem?” He masks his fear well, but the smell of magic has a new companion, the odor of human sweat. A lonely bead of perspiration dripping from the wizard’s brow betrays the man’s true feelings.
“A thousand years leaves one ample time to read.”
“I suppose it does. I am curious, however. Something you suggested intrigues me. If you were to change my friend into a vampire—”
“It is too late. He is dead and I didn’t even bite him.”
“Yes, but if he were to become a vampire would he retain that much of his original identity? Would he still be a philosopher in mind, yet a vampire in body?”
“I’m not really sure. It’s been so long since I was mortal, I truly don’t remember.”
“It’s a shame that you killed him so quickly, perhaps if you had been more patient.”
This discussion is growing tedious. It will be best if I end it. “It doesn’t matter, I can always find another philosopher if I become overly curious. Perhaps even a mage.”
Arcalian’s lips thin and his complexion pales. Nevertheless, he still tries to continue the charade. “A mage? What an interesting idea. Imagine, a vampire with the power of magic at his beck and call...”
“Don’t worry. It won’t be you. I intend to kill you outright. I don’t like you enough to give you that much power. The woman you sent to destroy me, though, she, I intend to keep.”
Arcalian looks at me with a forcibly puzzled expression on his face. There is a hint of panic in his eyes. “The woman I sent… I’m afraid I don’t understand what you mean.”
“Come now, don't you remember? She had blond hair, blue eyes, and a magical sword capable of severing my head. And I mustn’t forget her companion—the small dark-haired fellow with the wooden stakes—awfully handy to have around when you’re hunting vampires. They almost succeeded too, but tragically, they were running just a little late. Imagine my surprise this evening when I awoke to the grating sound of my own coffin being opened. Well, the rogue now wears his favorite stake, and the woman... she is now my bride! Do you remember now?”
“You are mistaken. I... have no knowledge of these... things.” He makes a furtive glance toward the wand lying beside the book on his desk, within easy reach if I moved as slowly as a mortal.
“Mistaken? I think not. ‘Lucian, you’re alive!’ Your performance at my entrance has already convicted you of your crime.” I place both my hands on his desk and lean toward him, snarling. “And with no court at hand, I am forced to pass judgment myself.” I straighten locking my eyes with his.
With human slowness, he makes a lunge for his wand. I too lunge, hurling his desk aside like a desiccated leaf in the autumn wind. My left hand clasps his right and twists it back almost to the point of breaking but not quite, not yet. He gasps in pain and a bolt of energy unleashed from the wand goes awry to reduce a far bookshelf to a smoking ruin.
“Before I send you to the grave, old friend, I need to know one thing. Who else amongst your scholarly kindred have you told of my existence? Answer me!”
Book Review:

Initially I was a bit confused as the book moves back and forth between the minds of Coragan and Drasymr.  Once I got used to the voice used for each character it was fairly easy to tell when the author moved from one character to the other.  But initially I was a bit confused when the bounty hunter started talking about being hunted and having a girl trying to shoot him.  Eventually I realized it was Drasymr, the vampire.  That helped clear a lot of things up.

The book is a different take on the vampire story, a much darker and more evil vampire. This book was much more along the lines of Frankenstein or what I think Dracula would be like, with the creepy evil guy and the twist making you look over your shoulder.  When my kids were little we took my daughter on the haunted house ride at Disneyland.  It scared her to death and she was convinced the ghost followed her home; I’m going to be looking over my shoulder for vampire for a while.  That’s the sign of a good book.