Delighting in Your Company review

Delighting in Your Company
A Haunting Romance
By Blair McDowell

What more could a girl ask for? 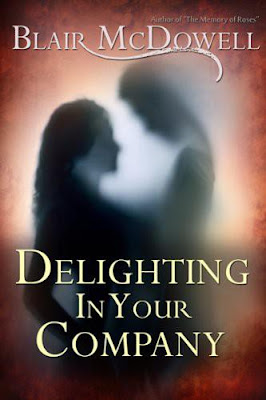 When Amalie Ansett visits her elderly cousin on the small Caribbean island of St. Clements, the last thing she’s looking for is romance. Just out of a disastrous marriage, she’s ready to swear off men forever.

That is until she meets local plantation owner, Jonathan Evans.

He is tall, good looking, intelligent and incredibly sexy.

What more could a girl ask for?

An unsolved murder … Then Amalie discovers that the man she loves is a ghost. Only she can see and hear him. Perhaps he is real to her because Amalie is the image of her distant ancestor, Jonathan’s bride in that earlier time.

Jonathan was murdered two hundred years ago, and has no knowledge of who killed him or why. A perilous trip to the past… When Jonathan asks her to help him by returning with him to his past, Amalie is torn. If she helps him solve the mystery surrounding his death, she could lose him forever.

If she doesn’t, she is stuck with a ghost for a lover. And a love that crosses the boundaries of time.

To save Jonathan, Amalie agrees to travel with him back in time to the Caribbean of the 1800’s, when sugar reigned supreme and the slave trade was making fortunes for wealthy planters and ship owners. Her adventures there include a slave uprising, murder, deceit and an enduring love that crosses the boundaries of time.

I started to write soon after I found my first pencil. But I began to write for publication about 30 years ago -- professional books. I wrote six of them, all still in print and still in use. Only lately have I turned to fiction. 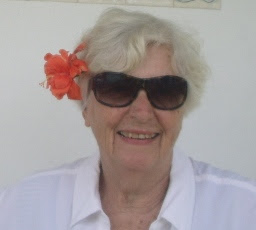 I'd have done it a lot sooner if I'd had any idea how much fun it was! I’ve lived in many different places. The US -- Certain cities call to me. I love San Francisco and Seattle and the wonderful Oregon Coast. Australia -- among the most open welcoming people in the world, and a wide open young country with incredible land and sea scapes, with amazing animal and bird life right out of science fiction.

Canada -- HOME. The place where I belong. I travel a lot. I usually spend the month of October in Europe, Greece or Italy, and the winter in a little house I built many years ago on a small non-touristy Caribbean Island. I have worked and studied in many places -- Hungary, Australia the US and Canada, and have spoken in most of the States and Provinces as well as Taiwan and various cities in Europe.

I enjoy being surrounded by cultures other than my own. I enjoy my own as well -- but variety is indeed the spice of my life. I keep busy -- and I love my life. I love meeting the people who come here to the west coast of Canada and stay in my B&B. I love traveling after the tourist season is over.

And I love writing. My interests?? Music, especially opera, reading everything in print, and Writing. And walking on the beach and swimming. At one point I had hoped to swim in every major sea and ocean. I've realized that may not be possible in one lifetime -- but trying has been fun!

It was Sunday morning and Elvirna’s day off. As usual when Elvirna was off, Amalie made breakfast when Josephina came down, around nine. But before that, she and Jonathan sat together in the rocking chairs on the veranda and watched the sunrise light the sea.  It was a favorite time of day for them both.
They were sitting quietly, hands touching, when Josephina came through the door, uncharacteristically early.
“Good morning, Amalie…Good morning, Jonathan. I trust you both slept well.”
Amalie drew in her breath sharply as Jonathan burst out laughing, that deep uninhibited laugh that Amalie had come to love.
“How…?” Amalie was too confused for speech.
“How long have I known Jonathan? For quite some time. I haven’t always been able to see him clearly, but I’ve always known when he was here.”
“Can you see him now, Josephina?”
“Not exactly. I know he’s here but his outlines are a bit fuzzy. Sometimes I see a sort of aura. I’m an Ansett too, remember. And sometimes I hear him whistling Greensleeves, ‘and I have loved you well and long…” She turned to Jonathan. “You always whistle that same phrase. It’s enough to drive a body crazy.”
Jonathan laughed again. “Sorry. I’ll try to remember to do a bit more of it in the future. Or perhaps to whistle another tune.”
Josephina nodded. “Thank you.”  She glanced at Amalie. “Since Amalie’s been here I seem to see you and hear you more clearly.”
Amalie shook her head. “But why didn’t you tell me, Josephina?”
“People already think I’m a little dotty. If I told them I saw ghosts…well, better to keep it to myself.”
“It’s such a relief to talk to someone else who can see him. I can more than see him, Josephina. To me he is as real as you.”
“That’s nice.”
“But don’t you see the dilemma we’re facing? Jonathan is a ghost. I’m not.”
“I don’t see how that’s very different from two people of different races or religions falling in love. You’re just two people of different times.”
“I didn’t say anything about love, Josephina.”
“You didn’t have to. I’ve watched you together for days now, walking on the beach.”
Not having any notion of how to answer that, Amalie changed tactic. “Jonathan has to be here for a reason. He needs to know what happened that night. And I must say we aren’t learning much by wading through the museum archives.” She shook her head. “And I can’t see how my being here can make a difference.” 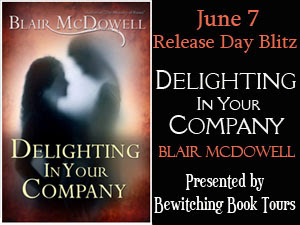 Jonathan answered her. “Your being here definitely makes a difference. But I think to find out what happened we’ll have to go back together, back to 1810, to the night when everything went wrong. Perhaps to the week or two leading up to that night.”
“Oh my.” Josephina went quite pale.
Why did that idea not seem crazy to Amalie. “Is it possible to do that?”
Jonathan nodded. “I’ve done it before. I’ve gone back and lived those last days over and over, but always the end is the same. I’m carrying you into the house. We’ve just been secretly wed.  I step through the doorway and...nothing.  That’s the last moment of my life I recall.”
“But if it ends that way each time, how can my going back with you help?”
“I think I know the answer to that.” Josephina looked at Amalie.  “Jonathan is of that moment in history. When Jonathan is there he would have no memory of now. Of his future. But you are of this day and time.”
Jonathan nodded. “That’s it exactly. There, I have no memory of being a ghost. I have no premonition of what is to come.” He turned to Amalie, “But, because your time is of the present, of this time and place, I think it is possible that you will be able to remember the now, to see and understand both as Amalie, my bride, and as my Amalie of this century. You may be able to see and to tell me what happened after I walked through that door. I don’t for one moment believe the written accounts.”
“But, even assuming I’m willing to do this, how do we get back to the past?”
“When I go I simply cross the threshold of Evans Plantation. There’s nothing very exact about it. Sometimes I find myself there two or three weeks before the end, other times I’m there only on the last day. But the crossing has never been difficult.”  He smiled, “Of course I am, as you would have it, a ghost. I have no idea how or if it will work for you.”
“Why do you think taking me back with you will make a difference?”
“You will be an addition to the equation. Something new. Something that wasn’t there before. I think in crossing you will become one with the other Amalie, but I believe you may retain your memory of the present, of this other time and place, as I, a ghost in this time, retain my memory of that other time. Does that make any sense?”
Amalie laughed. “Does any of this make sense? If I stopped to think about it I’d check myself into a loony bin.”
“I have been waiting centuries for you to return. Will you help me?”
Amalie looked at Jonathan. He didn’t speak again but his eyes pled for understanding, for help.
“I’ll try.”
Josephina smiled. “Well, I’m glad that’s settled. Shall I go pack you a bag? How long will you be gone?”
Jonathan laughed. “It doesn’t work that way. We will return to exactly the day, the same moment, when we left.” Then a worried frown crossed his face. “That is if Amalie can return. I’m not sure how that works. I’ve never tried it with anyone from another age before.”
Amalie laughed. “That’s reassuring.” Looking at Jonathan, Amalie had the fleeting thought that there could be worse things than being stuck with him for eternity. “If we’re going to do this, we might as well do it now, before I have time to come to my senses.”
His breath came out in a rush. “Thank you.”
Amalie kissed Josephina, who wished them good luck and waved them off as if they were going on a school holiday. They took the jeep out to White Wall, where they parked off the road and climbed through the high bush to the old foundations of Evans plantation house.

“This is it. This is where the portal is. When I cross the threshold you must be with me, as close beside me as you can get. I don’t know whether it will work. And I don’t know exactly where or when we will land. Are you ready to do this?”
Amalie merely nodded.
“Then give me your hands and step with me.”
Amalie reached toward him and the faintest brush of an icy breeze touched her fingers. Then the air began to swirl around her and the sky darkened. Wind rushed over and around her. She felt her hands clasped in an iron grip as the earth shook and she tumbled into an abyss, the sound of nothingness roaring in her ears.  Consciousness faded.

Someone said ‘The course of true love never did run smooth’ or something like that and that is certainly the case in this story.  Amalie starts out the story having just divorced, lost her parents, and is all alone in the world with only her friend and business partner left.  Then she finds a note from a distant cousin who turns out to be the last in her line also.
Amalie visits her cousin on a small Caribbean island, falls in love, but there are problems.  The she tries several times to prevent a murder… the same murder… from 100 years ago.  Eventually she succeed but at the cost of love.
This story is intriguing.  I love the idea that a ghost could find his reincarnated love and take her back with him to find out how and why he died.  Of course solving the murder allows him to stay in the past and sends her back alone.  This story is a unique idea and cleverly written.
I give this story 4 out of 5 clouds.

This product or book may have been distributed for review; this in no way affects my opinions or reviews.
Posted by Wall at 4:05 AM