Giveaway and review of Blood and Guitars

Blood and Guitars
Book One
By Heather Jensen 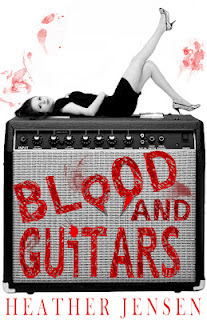 When Aurora meets Trey, a famous singer and musician, she’s only hoping to get her fill of human blood for the week. The last thing Aurora expects is for Trey to make her feel alive for the first time since she was, well, alive.

It begins with a casual painting lesson at her art studio, The Waking Moon, and quickly turns into a forbidden romance. Aurora is forced to hide her true identity from Trey, while keeping her relationship with the human a secret from other vampires in her Brood. Trey’s band is recording a new album and with Aurora as his muse, Trey is writing songs like never before.

After being hired by their record label to paint the album cover, Aurora has a legitimate reason for spending so much time with Trey and his band mates. Aurora can’t deny the unexpected connection she has with Trey, which is fueled by limpses into his emotions every time they share a kiss.

Caught between two worlds, Aurora must attend celebrity award shows and vampire rituals, find time to feed, and protect Trey from the dangers of the night, all while preserving her secrets.

Immortals And Melodies
Blood And Guitars #2 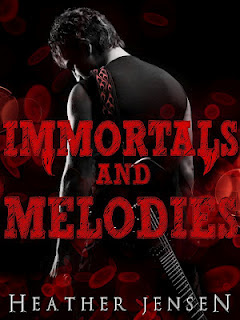 "I found myself wishing for the power and whimsy of fairy tales. If only things were as simple as we’re led to believe as children. I remembered the story of Snow White and Sleeping Beauty. Both were saved by the power of a kiss, drawn out of their lifeless state to live happily ever after. Desperately, I bent and left a soft kiss on Trey’s lips. It was foolish. I knew that, but even that knowledge couldn’t prepare me for the agony that ripped at my heart when he didn’t respond." -Aurora

Catalyst frontman Trey is no stranger to chaos, but even the life of a rock star couldn’t prepare him for the consequences of loving a vampire. Trey’s life is in danger; threatened by the very group he must join to stay alive.

His struggle to continue his career and release a new album is marred bye vents that force him to go to a powerful Synod Elder for help. Aurora has to keep Trey alive until she can make him a vampire, but her own kind will stop at nothing to prevent it.

The head of the Emissary is having her followed, and if she can’t figure out who is behind the violent attacks, Trey might not make it to the full moon. As Aurora battles her own kind, she’s also plagued by the risk she’s taking by changing Trey.

Will her moon-given power be enough to carry Trey through the change, or will he be left floating in the wake of destruction? 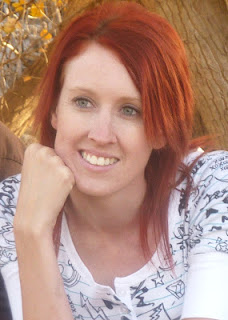 Heather Jensen writes paranormal fantasy for teens and adults. She began writing her first book at the age of 16. She is an avid reader and loves anything vampire-related, but likes all kinds of fantasy. When she’s not writing she enjoys traveling, listening to music, going to concerts, playing guitar and spending time with friends and family.

She is addicted to Oreos and White Knight drinks from Perks. Her favorite color is green and the uglier the shade the better.

Heather lives in Southern Utah with her husband and son where she continues to write the Blood And Guitars series.

The second book in the series, Immortals And Melodies has just been released on Kindle.

To purchase the first book in the Blood And Guitars series in e-book or paperback, visit http://heatherjensen.info/about-the-book/shop/ 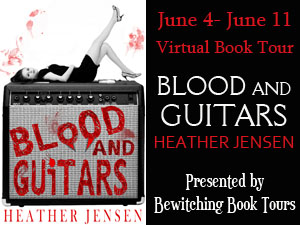 The clock on the wall in the loft of The Waking Moon read ten after midnight. I was standing at the easel, a brush in my hand, while Trey worked out a new song on his acoustic guitar. He sat on the floor with his back against the half-wall while his voice echoed around the loft.

“I lie awake
These sleepless nights can last forever
I try to take you in.

“I can’t believe …
You’re in my arms- and here with me
I pinch myself again.

“Cause I know … it’s worth it
You’re worth- whatever it takes
To make you stay.

This book was cute, but a little pedantic.  The plot was similar to other vampire books:  vampire falls in love with human, human’s life is endangered because of it, vampire turns human (or in the case of this book, plans to turn human).
There are some salient points that give this story enough of a difference to encourage me to read book 2 in the series (Immortals And Melodies).  The vampires are not harmed by sun or garlic, they just have extra powers when the moon is up.  The human in this case is a Rock Star, and the vampires aren’t very happy about her turning him.  In fact, they want him dead for daring to love a vampire.

I had trouble connecting with this book in a meaningful way.  I’m so over vampires.  That said the book had good writing and some very funny points.  I enjoyed the interactions between the characters that were ‘real’ and not like the vampires were perfect.  I will read the second book (Check back Sunday for the review) and see if it improves my view of the series. 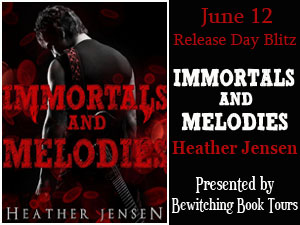 This product or book may have been distributed for review; this in no way affects my opinions or reviews.
Posted by Wall at 4:56 AM