Review of The Immortality Virus

In the mid-21st century, the human race stopped aging. Those who know why aren’t talking, and the few who are brave enough to ask questions tend to disappear. To an elite few, The Change means long life and health, but to the ever-increasing masses, it means starvation, desperation, and violence.

Four centuries after The Change, Grace Harper, a blacklisted P.I., sets off on a mission to find the man responsible for it all and solicit his help to undo The Change — if he’s still alive. To complicate matters, Grace’s employer is suspected of murdering his father, and when the police learn of their connection, they give her a choice — help them find the evidence they need to convict Matthew Stanton, or die. But if they discover Grace’s true mission, they won’t hesitate to kill her in order to preserve their shot at immortality.

Excerpt:
“Why did you call me here?” Grace asked. She remembered the newspaper headlines again and found herself wondering if, just maybe, Matt had killed his father. Accidents, murder, or disease were the only way for a person to die when age didn’t plunge them towards that fate. Perhaps Matt had been sick of waiting around for his father to step aside and leave control of Medicorp to him.
“Straight to business, then?”
Grace nodded. “You have to admit, this meeting is unusual.” She did not specifically mention the blacklist, but she was sure Matt would know what she meant. “Does this have anything to do with your father’s death?”
“My father?” Matt cocked his head to the side. “That was a terrible accident in the midst of a robbery. Once you get as old as we are, you begin to tempt fate every day just by being alive. Old age might not get to us, but accidents are inevitable. Besides, the police have already handled the investigation.”
“They found the killer?” Grace asked, confused. She would have heard. Besides, since the robber had successfully stolen a holosuit, it seemed unlikely that anyone would find him.
“Not yet, but our city has a fine police force, and I’m sure they’ll do their job admirably.”
Grace decided not to argue with the idea that the Kansas City police force was either “fine” or “admirable.” They would enthusiastically serve the rich, perhaps, but a madman could go on a shooting spree in the park, and they’d just call in the recyclers.
“Then why–?” Grace began.
“How old are you, Ms. Harper?”
“I’m sure you know,” Grace said. She suspected that this man knew quite a lot about her.
“Yes, but I’m trying to make you feel more comfortable.”
“I’m one hundred and thirty.”
“Still quite young, then,” Matt said. “The odds are still on your side. Although you chose a dangerous line of work.”
“Is there a safe line of work? This is what I’m good at.”
“Rumor has it that you’re good at finding people,” Matt said.
Grace didn’t hesitate. “The best. I’ve had a fifty percent success rate across my career.”
“Fifty percent?” Matt echoed his voice hollow. “That doesn’t sound very certain.”
Grace shrugged. “Who said life was certain? But most in the business don’t find more than one in ten.” Grace hesitated, but decided to go for broke. “I don’t always get work looking for people with ID chips, either. My clients aren’t people who deal with The Establishment, but I guess you know that.”
“Of course.”
“So then I must assume that the person you’re looking for is either someone without an ID chip or someone The Establishment wouldn’t want you to find.” Grace paused and tried not to think about the implications of that. “Probably both.”
A small smile played at the corner of Matt’s mouth, but he did not answer in words. He walked to his desk, opened a drawer, and pulled out an old-fashioned digital diary, the kind people used to buy when they had more money and resources than they knew what to do with. Grace had only seen them in movies. It looked a little like a notebook from the outside, but opening the cover revealed a microphone and speakers. “I ran across this diary a few weeks ago, mixed in with some old records the company was throwing out. It’s fascinating.” 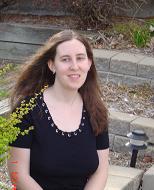 Christine Amsden has been writing science fiction and fantasy for as long as she can remember. She loves to write and it is her dream that others will be inspired by this love and by her stories. Speculative fiction is fun, magical, and imaginative but great speculative fiction is about real people defining themselves through extraordinary situations. Christine writes primarily about people and it is in this way that she strives to make science fiction and fantasy meaningful for everyone.

At the age of 16, Christine was diagnosed with Stargardt’s Disease, a condition that affects the retina and causes a loss of central vision. She is now legally blind, but has not let this slow her down or get in the way of her dreams.

Christine currently lives in the Kansas City area with her husband, Austin, who has been her biggest fan and the key to her success. They have two beautiful children, Drake and Celeste.

Imagine a life where there is no Alzheimer’s, Dementia, or other illnesses connected to aging because no-one ages.  That’s right, a virus made it so that no-one aged.  You could still be killed, have an accident and die, or do some other stupid thing to die, but dying of old age didn’t happen.

This idea reminds me a little of “Tuck Everlasting” where one family lives forever, but in this book it’s everyone.  Personally I’m not sure I would like that, but it sure makes an interesting story.

You have to read this book.  It has angst; tension; humor; romance; questions about slavery, genetic manipulation, and the right to live or die; and adventure.  I give this book 4 out of 5 clouds.

This product or book may have been distributed for review; this in no way affects my opinions or reviews.
a Rafflecopter giveaway
Posted by Wall at 3:00 AM