Review of Intangible by J. Meyers 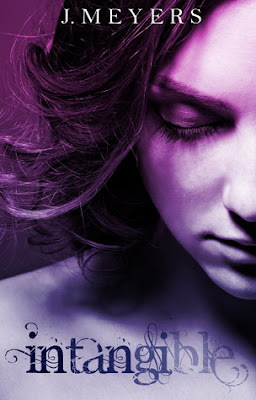 Twins Sera and Luke Raine have a well-kept secret--she heals with a touch of her hand, he sees the future. All their lives they've helped those in need on the sly. They've always thought of their abilities as being a gift.

Then Luke has a vision that Sera is killed. That gift they've always cherished begins to feel an awful lot like a curse. Because the thing about Luke's ability? He's always right.

And he can't do anything about it.

Excerpt from back cover:

And then she knew. No vision had ever terrified him. Never. In seventeen years. It was as if his own life were at stake. But he didn't See his own future. He only saw other's. She suddenly had a terrible feeling that she knew exactly whose future he'd Seen.

Her voice was a whisper. "Do I get hurt?"

His face contorted, but he didn't say anything.

He closed his eyes.

"Oh." The air rushed out of her lungs on that one word. She was going to die.

Luke's voice was tight, tortured when he said, "We gotta go." He bent down to pick up Sera's bag again, then headed out the door. Sera looked down at her feet. Their book bags lay there. She should probably pick those up, she thought. Luke was already on the porch, waiting. She reached down and grasped the bags, then woodenly stepped outside.

Luke stared at her a moment, searching her face, then reached around her and locked the door. He started down the steps, but her voice stopped him.

J. Meyers grew up in Vermont and now lives in Central New York. When she's not reading or writing, she can be found chasing her four kids around, exploring the outdoors with them, relishing the few quiet moments she gets with her husband, baking sweet treats, or forgetting to make dinner. Though she cannot actually see the future nor heal with a touch of her hand, she likes to think her children believe she can. Intangible is her first novel.

Imagine finding out that you have a special power, but when you tell your parents they look scared.  And then you try to help your grandmother feel better and she curses at you.  Then years later your father dies, and shortly afterwards you find out that you were adopted.  On top of all this you find out Vampires and Fae exist.

That is just in the first ½ of the book.   Can you imagine?  The world within a world is created in amazing detail and clarity.  The tension in the story builds to a crescendo with brilliant writing.  Each word is used with perfect intent and pulls the reader further into the world and lives of Luke and Sera.

I would strongly recommend this book for anyone who likes fantasy literature.  I believe that middle schoolers, high schoolers, and young adults would especially like this novel.  I would give this book 5 out of 5 clouds.

This product or book may have been distributed for review; this in no way affects my opinions or reviews.
Posted by Wall at 2:57 AM