Review of Pack of Lies


Book Review of Pack of Lies 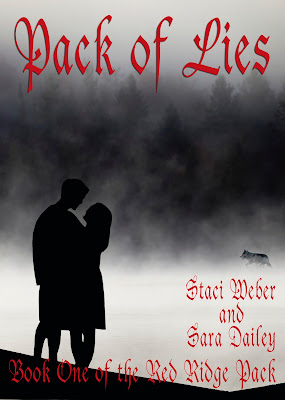 The last thing Allison Wright ever expected when she moved to Red Ridge, New Mexico was to come muzzle to muzzle with the wolf of her dreams.

Seventeen-year-old Allison Wright is convinced she’s losing her mind. Uncontrollable mood swings, hot flashes, and the urge to punch anyone who gets in her way are suddenly becoming everyday occurrences. Before her erratic behavior gets out of hand, Allison’s mother finally comes clean about her dark secret. Mom is a werewolf, and soon Allison and her brother Aiden will suffer the same fate. When Allison reaches her breaking point, the family leaves their life in Texas to move to Red Ridge, New Mexico where they rejoin the pack that Allison’s mother left behind almost 20 years ago.

Unfortunately, not everyone in Red Ridge is thrilled about Allison’s arrival, especially when she attracts the attention of the very handsome, very taken, soon-to-be alpha, Cade Walker. Little does Allison know, her mere presence is causing a rift in a once unified pack. Not only has Cade been forbidden from being with Allison by his father, the pack’s alpha, Cade’s girlfriend, Kendall Stuart, will stop at nothing to get Allison out of the picture. Well on her way to becoming the next alpha’s mate, Kendall expects to rule the pack by Cade’s side even if it means teaming up with a rogue werewolf with an agenda of his own. Determined to get rid of Allison permanently, when Kendall and the rogue join forces, all hell breaks loose and no one in the pack is safe, especially not Cade and his true mate.

Link where book is sold:     http://www.BoroughsPublishingGroup.com Both Sara Dailey and Staci Weber are avid readers, English teachers, friends, wives, and soccer moms. They have been teaching together for the past eight years, and writing together for four. Pack of Lies is the second young adult novel for this duo.

Book excerpt:
“I picked up on a scent that stopped all thought, all movement, leaving me standing completely still, breathing in a smell that I would never forget. A mix of earth, and musk, and honeysuckle, and sandalwood filled my senses leaving me with a need, a need to find this thing that was suddenly making me salivate, suddenly making me ache with desperation.
Without hesitation, my nose hit the ground as I began to track the enticing smell. I didn’t look up. I didn’t stop moving. I didn’t stop to think about what I might find. None of it mattered. I needed to find the source of that wonderful scent.
In the near distance, I heard a rustling in the brush, which ceased the mission that had held me spellbound. I stopped dead in my tracks and looked around, spooked by what I might find, but what I saw was the last thing I expected.
Peering out from behind a tall oak, a wolf was watching me. We just stood still, staring at each other, neither of us moving a muscle. His amazing green eyes were in sharp contrast to his deep, dark fur. He was a much bigger wolf than me, strong and lean, and the glint in his eyes told me that he was no ordinary wolf.”
Key Search Words:
Young Adult, Paranormal, Romance, Werewolves, Shape-Shifters, Teens, Love, Wolves, Fantasy

This is a fun story.  Imagine growing up thinking that your extended family, grandparents, aunts, uncles, cousins, etc. are all dead.  Then suddenly all your friends are picking fights with you, are jealous of you, and you haven’t done anything different that you have ever done before.  After getting into your 3rd fight at school, your parents decide to tell you that your mom is a werewolf and has been on the lamb from her family because she was supposed to marry the alpha of her pack but fell in love with your dad (a human) instead.  Yeah, I would have called the loony bin personally.  But for Allison, this is her new life.  And because of all these changes she, her brother, and her parents are moving to a remote mountain area to live with her mother’s wolf pack.  Kind of makes your teenage problems seem miniscule in comparison, doesn’t it?

This story is romantic, adventurous, suspenseful, funny, scary, sad, happy, exciting, and tense.  It is also a great read, especially for someone who enjoys paranormal books.  And if you enjoy shifter stories, then this is a must read.