Giveaway and Book Review of The Moonstone and Miss Jones

The Moonstone and Miss Jones is the dark and sexy sequel to The Seduction of Phaeton Black. Phaeton returns to England in time to help Doctor Exeter and the mysterious deadly Nightshades rescue London once again––this time from Professor Lovecraft's destructive tinkering.

As the threads of existence begin to unravel, the eccentric scientist attempts to save his son’s deteriorating condition by replacing body parts with mechanical apparatus. Ah, but how to power them? The near mad professor believes he has found a way to unleash the arcane energy inside the Moonstone and he needs Phaeton Black to help him do it.

When Phaeton is shanghaied in Shanghai, America Jones assumes the worst––that he has abandoned her in the Orient. An angry Miss Jones returns to London, where their spirited partnership takes an unexpected turn––a new business venture MOONSTONE INVESTIGATIONS. No uncommon psychical disturbance refused.

Well, why not mix business with pleasure? 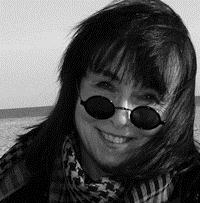 In 2010, Jillian won the RWA Golden Heart for An Affair with Mr. Kennedy and went from no agent or publisher to signing with Richard Curtis and being offered a three book contract by Pocket Books. That summer, she also won the erotica category of the 2010 Romance Through the Ages contest for The Seduction of Phaeton Black and was offered a three book contract by Kensington Brava. Needless to say, she has been busy writing books this past year and a half! Jillian lives in Southern California and is currently working on the third book in the Phaeton Black, Paranormal Investigator series, The Miss Education of Dr. Exeter.

A lone gaslight sputtered above the stair landing. America steadied herself and waited for her eyes to adjust to the darkness below. The hansom ride from the Docklands to the West End had been one of the most harrowing in her life––with the possible exception of a rickshaw pulled by Zulu in Durban, South Africa.
She squinted and a few details emerged from the flat below, including a shadowy figure in the overstuffed chair. A soft snore rumbled its way up the stair––it was Phaeton, all right. She ventured further into the room for a better look.
He lounged in the chair with his pelvis forward, legs spread. America angled her head, studying him. There was a rough of whiskers on his chin; could he look anymore dashing? She exhaled a sigh. Only if he opened those liquid brown eyes.
“A little lower, darling.” He mumbled, still asleep. It suddenly hit her. He was safe. He was healthy. The bilge rat.
“Darling, is it?” she whispered. Her gaze trailed down his open waistcoat to the buttons on his trousers. As if in answer to her own lascivious thoughts the buttons began to open.
She grinned at first––was this some new kind of power emerging? Something ancient and primal fueled by lust? She had noticed a marked increase in her abilities these last few months, there was no question they were getting stronger. She reached out and her hand was slapped away––by what she had no idea. She tried again and was flung across the flat onto the lumpy old chaise longue.
America sat up and stared. Something tugged at Phaeton’s trousers––something powerful enough to manipulate the physical world and yet remain unseen. Rising to her feet, she strode across the floor and slapped Phaeton hard across the face.
He groaned, still in a deep trace. “Just the tip, Georgiana.”
She slapped him again. “Snap out of it!”
Jarred awake, Phaeton pushed away from her and blinked––several times. She slapped him again. This time he rubbed his jaw and his eyes watered. “America?” Gradually, between squints and blinks, he came around.
Her fists landed on her hips. “Who is Georgiana?”
Phaeton eased back into his chair, though he regarded her with some wariness. “A rather persistent succubus. And you certainly aren’t one of those––thank God.” If it was possible for a  man to have sultry eyes, Phaeton had them. He tilted his chin and studied at her. “Though, I must admit the nasty little vixen has me in some discomfort––would you mind?” He gave a nod to the bulge in his trousers.
“Stuff it, Phaeton.”
“Exactly.” A slow grin twitched on the devilish mouth. “I’m just asking.”
“Goodness––separated for less than two months and I had already quite forgotten how exasperating you can be.”

“You followed me––rather sweet of you. I wasn’t sure you would. I thought you would think I jumped ship and sailed off––abandoned you.”
America’s eyes narrowed into cat slits. “According to your wire, which I received just yesterday, you were shanghaied––in Shanghai.”
Phaeton shrugged. “Old joke, not particularly amusing anymore.”
She stared at him. “You must trust me when I say, it was never comical––in the  least.” America shook her head and moved to the pantry area of the flat. She braced herself against the table edge. “I chased you halfway round the world, Phaeton. I want the truth this time, and not a crafty as you please answer.” She swept an errant curl back into her top knot. “I believe I’ve known eels less slippery.”
Phaeton wore that cajoling half smile. “You’re angry with me.”
“Mad at you? No Phaeton, I’m not angry with you. I’m...I’m furious.” America choked on her own words, or was it the painful and growing lump in her throat that stifled her breath? “I searched for you for in every opium den and every back alley of Shanghai. Only after a great deal of money changed hands was I able to find out you’d cut and run––aboard the Boomerang. Do you have any idea how I worried?”
“I’ve caused you great torment, but I swear to you none of it was my doing. Yes, I was on that ship––in leg irons for more than half the voyage. I was cracked over the head in Blood alley, stuffed in a sack and taken aboard ship. “Phaeton rolled his eyes a bit. “Turns out the captain was a regular chap, with a good supply of whiskey––nightly card play.”
America shook her head. “How lovely for you. I don’t suppose there was any chance to escape––or any way to get word to me?”
“But I did get word to you, love––darling––” Phaeton appeared rather stricken.
The tears that had welled up, were streaming now. “And while we were separated did you…think of me?”
Phaeton rose from the chair. “Every minute.” He strode toward her slowly. “Of every hour.” He caught her up in his arms. “Of every bleeding day.” His gaze fell to her mouth, and her lips parted. Good God, what a hussy––she was sending him an invitation.
“Have I ever told you I love you––outside of the throes of passion?”
America shook her head.
“I love you.”
America pressed her hands to his chest. “Too late, we’re in the throes of passion.”

Thoroughly enjoyable and very sexy, definitely worth reading.  Just keep the fire extinguisher handy if your love isn’t around.  This book is hot and will definitely get you smoldering.

This product or book may have been distributed for review; this in no way affects my opinions or reviews.
a Rafflecopter giveaway
Posted by Wall at 6:19 AM