Heart
Book I in Animal Trilogy
By Jacqueline Paige

Three women without knowledge of their true heritage...
Three men that have waited for their mate all of their lives...
Hearts and tempers collide with wild passions and animal instincts
in the Animal Trilogy
~
Heart

Torn from her sheltered life, Rayne is alone and scared after she discovers her fiancé is not the man she thought he was.  Unable to accept the corrupt world he belongs to, she flees to the furthest possible location she can reach on her own.  Nothing could ever prepare her for the journey and what she finds out when she arrives.
Is she strong enough to survive on her own?
The epitome of the lone wolf, Devin stays in the wilderness and far away from people, avoiding the decision of whether to accept his title as leader and alpha of the pack.  One alluring woman stirs up his resolve and passion when she disturbs his solitary world.  The man inside is tempted in a way he can’t understand but his wolf knows he’s found his mate.
Can he have her without succumbing to the responsibilities waiting for him? 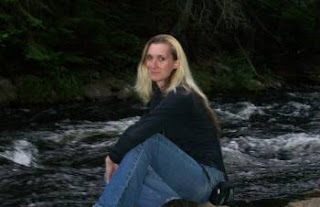 Jacqueline Paige is a world class multi-tasker being a mother to five adventurous and unpredictable children, a cafe manager and having a colossal imagination that allows her to step outside of reality into a world of paranormal romance —with just a touch of suspense.

Jacqueline lives in Ontario, Canada and avoids the ever changing weather of the region she lives in by creating other worlds to fall into in her stories of all things paranormal.

Her first book was published in 2009 and since then has published ten.  She is always writing and currently has more than a dozen stories in one stage or another of the writing process.

If nothing else she was warmer now.  How long would the rain last?  Do I want to wait it out and then try to find a washroom – in the dark?  Rayne shook her head before she could go any further with that thought. There was no way she was getting out of this car until it was light out, rain or no rain.  How many hours until daylight?  She debated very briefly whether she could squirm around and reach the purse to get her phone.  Highly doubtful.  Besides being cocooned in the puffy material, the phone was off for a reason and turning it on just to check the time wasn’t worth the risk of Aiden being able to trace the location.  Truthfully she didn’t know if that was possible even though all the movies referenced it being so, but understanding what type of man Aiden was and what he was capable of, she wasn’t taking any chances.
Working one arm free from the bag, she shifted far enough forward to reach the ignition; he couldn’t track the cars clock.  Turning the key, her heart sunk when she noted the time, there were too many hours left until dawn.  She looked out the windshield and froze, her heart jumped into her throat. Afraid to so much as breathe, Rayne stared at the animal a few feet away from the headlight.  Her brain first said dog, but that was no dog.  That was a wolf; it had to be a wolf.  Were wolves that big?  It seemed bigger than in any pictures she’d seen.
She sat there looking at it, not sure if she should honk the horn or just sit and try not to get hysterical waiting for it to leave.  The car may be metal, but the roof was something this animal could probably get through. As she continued to stare at it she couldn’t help thinking it was a beautiful creature. It’s grey and brown fur looked soft and thick, not that she’d ever be able to find out if it was.  It was the way the haunting grey eyes watched her that made her decide not to honk the horn or scream as loud as she could, which had crossed her mind briefly.  Rayne was fairly certain it was as surprised to see her as she was to see it.  Didn’t wolves travel as group?  A pack?  She wanted to look around and see if there were more in the trees, but the logical part of her brain said she was better off not knowing.  Never argue with the logical part.
She was sure she stopped breathing all together when it took a step closer to the car and then turned quickly back towards the trees.  As she was reaching for the keys it stopped and looked back at her for the length of two heart beats before it bolted into the trees and disappeared.
Turning off the key, she sat in the dark leaning back against the seat while she tried to remind her body how to take air in. In this moment with her heart beating so loud she could hear it, or at least it felt that way, Rayne reached the decision that she was not getting out of the car until daylight, and even then was questionable.  One more conclusion was also not turning the lights on again; her mental state was much better not knowing what else was outside of the car.  She checked to make sure the door was locked, she did know a wolf wouldn’t just walk up and use the door handle, but she felt better knowing that she was locked in and more importantly other things were locked out.
Pulling her arm back into the sleeping bag, Rayne shuffled down as far as she could and closed her eyes.  The sooner she slept, the closer daylight was to getting here.  Over the noise of the water beating off the car, she thought she heard a howl.
Review

Okay, so if you have read my other reviews of Jacqueline Paige’s books, you know I’m a HUGE fan.  And this book proved to be just as fabulous.  In fact, I stayed up waaay to late reading.  If you are a romance, were-, shifter, or helpless female become strong fan then this is the book for you.

I loved the fact that the heroine in this story didn’t need a man to rescue her, but was still open to having a big strong man in her life.  Of course we learn the truth near the end… but I’m not giving it away here.

This product or book may have been distributed for review; this in no way affects my opinions or reviews.
Posted by Wall at 3:29 AM