Ever since I was a little girl, I dreamed of being ordinary. That my mom baked cookies instead of brewing spells. That my dad lived with us, not on the demon plane. All I ever wanted was to be like everyone else.

I know what you're thinking. You'd die to live in my world. How cool would it be if magic was real and you could do anything?

You have no idea. Here I am in another new town, but it's the same old thing. Cheerleader bullies? How original. Friendless again? Who's surprised? I suck at fitting in. Especially when I'm in the middle of saving my family from total destruction.

My name is Sydlynn Hayle, and that's my life. 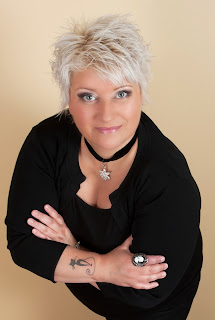 Patti Larsen is an award-winning middle grade and young adult author with a passion for the paranormal. But that sounds so freaking formal, doesn't it? I'm a storyteller who hears teenager's voices so loud I have to write them down. I love sports even though they don't love me. I've dabbled in everything from improv theater to film making and writing TV shows, singing in an all girl band to running my own hair salon.

I've had my sights set on world literary domination for a while now. Which means getting my books out there, to you, my darling readers. It's the coolest thing ever, this job of mine, being able to tell stories I love, only to see them all shiny and happy in your hands... thank you for reading.

Do you remember being in High School?  Do you remember, or were you, the kid that just didn’t quite fit in?  Or maybe the one that tried to fit in just a little too hard?  That would be Meira.  She just wants to be normal, a little difficult for the child of a witch and demon.  If that wasn’t enough, she finds out that she can’t give up her powers in 2 years, at age 18, like she planned.  Turns out her powers may be a little stronger that initially thought.  This could be a problem for Meira, who spent the last 16 years trying her best to avoid magic.

If that’s not enough of a problem for a teenage girl, someone is trying to kill members of her coven, including her family.  Meira may have to learn what being a leader means a little sooner than planned.

This is a delightful novel about the angst of growing up just a little different than everyone else.  The story is charming and the underlying idea that you need to accept yourself for who you are is wonderful.