See my review of ArticFire here, and be sure to enter the Giveaway.

I appreciate your taking the time to visit with us today.
Hi Mindy, thanks for letting me stop by.

1. What inspired this particular novel/book? 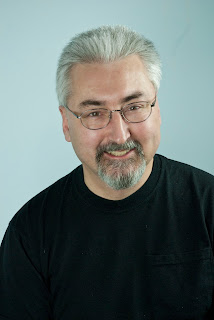 The threat of nuclear holocaust, invasion from aliens and bio terrorism, while if done right is exciting and action packed, but it has been done over and over again. I was looking for a new and more creative way to take over the world.

Part of the inspiration for Arctic Fire came from two television specials I saw on the History Channel. One was about weird weapons from WWII (the ice ship you’ll read about in the book) and the other was about mega disasters, but I can’t tell you about it as it would be a spoiler. Let’s just say that one sparked interest in the other.
(I was interested to here about the weird weapons from WWII, I thought I had heard about someone actually trying to sail an ice berg ..or wanting to.. to bring water somewhere.. so that was interesting.  Now I have to research odd weapons from WWII).

2.  What character was your favorite to write for in this story? Why?

I wanted the hero for Arctic Fire to be a little different than the stock hero of action thrillers. Gabriel Pike is the “everyman hero.” He isn’t ex-military, a Kung Fu master or a superhero; he is an ordinary man put into extraordinary circumstances.

He flies a Korean War vintage F-86 Sabre jet for his engineering firm, and being an engineer, Pike sees things just a little bit differently than the rest of us. And even though he’s used to running out structural calculations to five decimal points, he is a practical man who lives by the simple motto that there are few things in life that can’t be fixed with a bigger hammer or a roll of duct tape!

But, having said that, sometime the smaller characters have a way of getting to you.  Albert Jenkins is a retiring bank guard who finds himself in his worst nightmare. He is torments by events from the past and wasn’t able to prevent the loss of his own daughter but he is determined in the middle of a bank robbery not to let fate take another young life. He knows what is right and simply does it. A feat that is often harder to do than it sounds.

3.  Which was your favorite scene to write?

Here I go again, I have two. From the dramatic point of view, I enjoyed writing the opening scene. Without giving too much away, I enjoyed the history behind it, the research and the “what if” in crafting of the scene.
From a purely fun point of view, there is a scene later in the book where a reporter is asking Pike about his possible romantic interest in a woman. Clueless in Seattle just about sums up our hero’s reply.

4.  What was the hardest thing about writing this story?

I love doing research, digging up little gems of knowledge that lead from one interesting fact to another. With so many areas to research it was sometimes difficult for me to decide  what to put in, what the reader really needed to know for the story and to leave out what I thought was just plain cool.

5.  What would you say is your interesting writing quirk?

I circle my desk three times before sitting down chanting ancient Babylonian verses. Doesn’t every writer? Just kidding. The only quirk I guess you could say is that I like to have a cup of coffee or two when I’m writing. But living just north of Seattle, home of Starbucks, I would think it would be more quirky not to have coffee with my writing.

It certainly wasn’t a writer! Thinking about it, I don’t really remember having a specific thing I wanted to be when I grew up.

7.  When did you first realize you wanted to be a writer?

I guess you could call me a late bloomer. I took some creative writing classes in college but never really did much with them. Fast forward twenty five years and my brother convinced me to start writing. They say to write about what you know, so having grown up on Star Trek, my first novel was a handwritten Star Trek tale.
I wrote several short sci-fi stories (which I later turned into Act of God) then moved on to a couple of WWII books (another passion of mine) and now I’m writing action-adventure thrillers.

8.  Where do you find your Inspirations?

I find story inspiration all around me. TV and radio programs, newspaper and magazine articles, anything that would make me go hum, I wonder if I could turn that into a great story?
Writing inspiration comes from seeing success from other authors I know, knowing that if they can do it, so can I.

9.  What do you like to read? Who is your favorite author?

I read pretty much what I write, action thrillers, techno thrillers and some military/spy books. As for authors, I like Michael Crichton, early Clive Cussler, Jeremy Robinson and Jeffery Deaver. There are many others of course but these are the ones I have read and enjoyed the most.

10.  Please let readers know where they can connect with you and purchase your books...

11.  Anything additional you want to share with the readers?

I hope your readers will like Arctic Fire. I enjoy writing thrillers that leaves the reader wondering where the facts end and the fiction begins. Be sure to check out my latest adventure, Greed. It will be out just in time for Christmas.

Thank you so much for chatting with us today.
My pleasure, Mindy, any time.
Posted by Wall at 3:00 AM