BLURB:
As a child in the desert kingdom of Gryth, Ivory witnessed the brutal murder of her parents at the hands of a sinister race known as the Lecs.

Now Queen of her people, a vengeance-fueled Ivory launches a final battle to annihilate the enemy once and for all. But on the eve of war, betrayed by her own kind and left in the hands of the Lecs, she's forced to learn the shocking truth about their two peoples, and the diabolical curse that's plagued them for centuries.

Armed with newfound knowledge and unexpected allies, Ivory must face the real enemy that's haunted her all her life, and make a choice that will mean the difference between a new beginning and the end of the world.

Ivory is an exercise in duality made reality; an exploration of darkness and light, male and female, sun and moon… seen through the eyes of two cultures ripped apart by an ancient evil whose pain resonates through the ages like the beating of a drum.

Aren't author's bios boring? I always wanted to read one that went something like this: 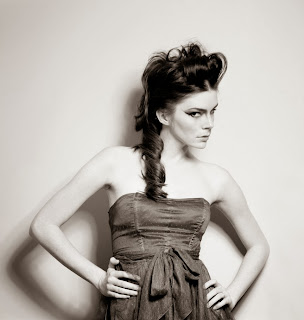 F.M. Sherrill: recent citizen of earth. Plans on ruling the planet once she gets over the common cold. Or, F.M. Sherrill: time traveler. Decided to alter the space-time continuum by writing a novel, thus changing history slightly, which will eventually lead to the rise of a new human species.

But here it is. F.M. Sherrill is a novelist, A.K.A. an avid bullshitter; that's why she lives in L.A.. She's been writing for as long as her ancient mind can remember, devouring tales like an anemic vampire roaming the streets in hot pink heels, always thirsty for more. When she's not writing, she's making steampunk weapons, sewing giant plant-eater Mario plushes, making costumes for some film bloke or cosplayer, and sculpting/casting movie prop replicas while gardening in her urban apartment. Her favorite tools? A soldering iron, a blowtorch, a band saw, a sonic screwdriver, a replicator and an active imagination.

This story was somewhat disconcerting.  I felt like I jumped into the middle of the story and left before it ended.  Therefore I felt slightly off balance though the whole book.  It worked for the type of story it was, but was disconcerting all the same.

I love the idea of a people separated and then in one person or a couple people reconnected, but it was kind of like falling into the new world in a Jules Vern novel.  As I stated, it was like being off balance though the whole story.  I didn’t dislike it, but I was never comfortable or in sinc with the characters in the novel.  I’m not used to reading novels where I don’t either love or at least relate to the characters on a personal level and I never really felt that connection and yet on another level I could relate to Ivory’s feeling of not quite belonging.

On the whole, I think it is a good book to read.  I give the story 3.5 out of 5 clouds and think it’s one of those stories I’ll have to sleep on and re-read later to fully get the impact of the story.

This product or book may have been distributed for review; this in no way affects my opinions or reviews.
Posted by Wall at 7:48 PM