Book Review of I'll Be Damned and Saved by the Spell: 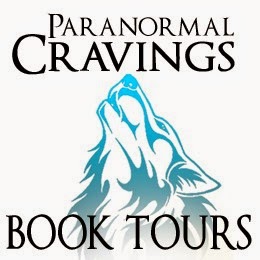 I'll Be Damned, Book 1 of the Anna Wolfe Series 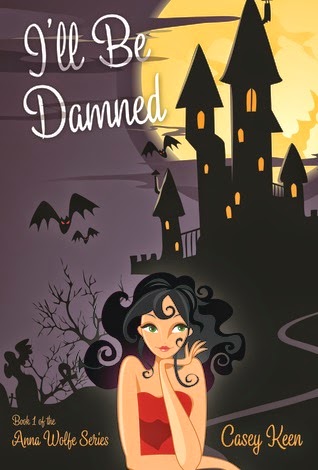 An impending war between Heaven and Hell looming around the corner.

A Grand Witch who has no idea what she is.

The Prince of Darkness’s obsession in claiming her.

As the owner of the coffee shop Deja Brew in Savannah, Georgia, Anna thought her life was ordinary. That is until her sister is kidnapped by a demon, prompting two handsome men to march into her life unexpectedly. Valen, the sinfully gorgeous, overprotective werewolf who is Anna’s sworn guardian and Roman, the most handsome and powerful Warlock in the entire Netherworld.

Suddenly, her world is stripped of everything she knows and replaced with frightening news about who she really is - a powerful Grand Witch. Now, it’s up to her to draw out her dormant magic, rescue her sister and stop an impending heavenly war threatening to eradicate the human race all while staying alive.

...Searing, damp stones press into my cheek, squishing my other eye closed. I sit up, wiping the nasty grime off my face. The slickness of it makes me wince. God knows what it is. I try to take a deep breath, but fail. Breathing is a chore in the dense, blistering air. It feels like I'm inhaling globs of boiling water. I stand, allowing my limbs time to regain their balance. Suddenly, I'm running down a passageway without any light to guide me... Thousands of butterflies take flight in my stomach as a current of air swiftly engulfs me. I'm falling at a high rate of speed, like the dip in a roller coaster, minus the excitement and safety harnesses. I try to scream, but panic hijacks my voice. I hit the bottom hard, miraculously unscathed.
I stand, wiping a sticky substance off my jeans. I try not to dwell on it. Lifting my arms, I extend them in front of me, searching for a doorway. My hands grope over the hundreds of clammy bricks surrounding me like the bottom of a well. In the loud silence, I hear my name, but Janie isn’t calling me. This voice is lower than a whisper, almost inaudible. Am I losing my mind? Confinement in closed quarters and pitch-black darkness have been known to do that. Again, I hear my name... Anna... It echoes off the tightly enclosed walls, and smacks my ears. It grows louder before abruptly stopping. A velvet voice soothes my sore ears, but makes me jump backwards. The back of my head rams the wall, forcing me to slink onto the ground. My muscles tense and my entire body begins to throb. I prop myself against the bricks, hoping it will cease. I attempt to fold my legs into my chest, but they rebel in pain. I focus my thoughts on survival, rather than the insects I know must be blanketing the ground...


Saved by the Spell, Book 2 of the Anna Wolfe Series 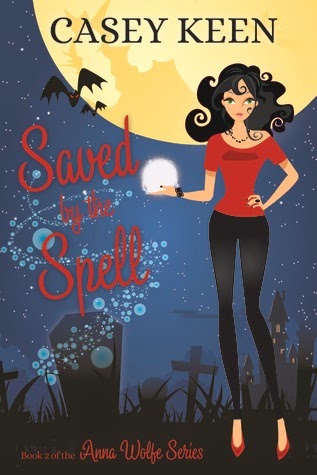 A Grand Witch behind bars.

A stunning Werewolf and a devilishly handsome Warlock’s pursuit for her affections.

You think you have it bad? Grand Witch Anna Wolfe awakens to find herself imprisoned by Micah, the Prince of Darkness. Micah’s on a quest for world domination—and it’s not just the Netherworld that’s in danger. The human world is threatened as well. Now, it’s up to Anna to escape from Micah's clutches so she can locate The Scholars and an ancient book before both fall into the wrong hands.

With a fiercely loyal Werewolf and immensely powerful Warlock by her side, what can go wrong?

If fighting off the Prince of Darkness wasn’t enough, Anna’s emotions are a whirlwind, as she battles between what fate demands and what she actually wants.

...His magic continues its course through me, draining all of mine. I need to resist... to fight him. I have to do something before he has the chance to completely snuff me out or find The Scholars. My jaw clenches and my hands roll into tight balls. My shoulders tense, preparing myself for the upcoming battle. I focus all of my energy into stopping him. Bit by bit, my magic shoves its way past his like a bully on a schoolyard. His grip stiffens. A trickle of blood glides down the side of my forearm from his piercing fingernails.
“Go ahead, Anna, fight me. I guarantee it will only hurt you more.”
I throw every memory and emotion Micah has created or tarnished, tossing them into the raging furnace of hate burning inside of me. I slam my eyelids shut and Valen’s face pops inside my head. I need to get back to him. I squeeze my eyes tightly, channeling all the vigor I have, hoping to push Micah out. A fissure breaks right down the middle of his magic, allowing mine to explode to the surface. I feel his power retreat as mine conquers his. I flip my eyes open, stealing a glimpse of his face... 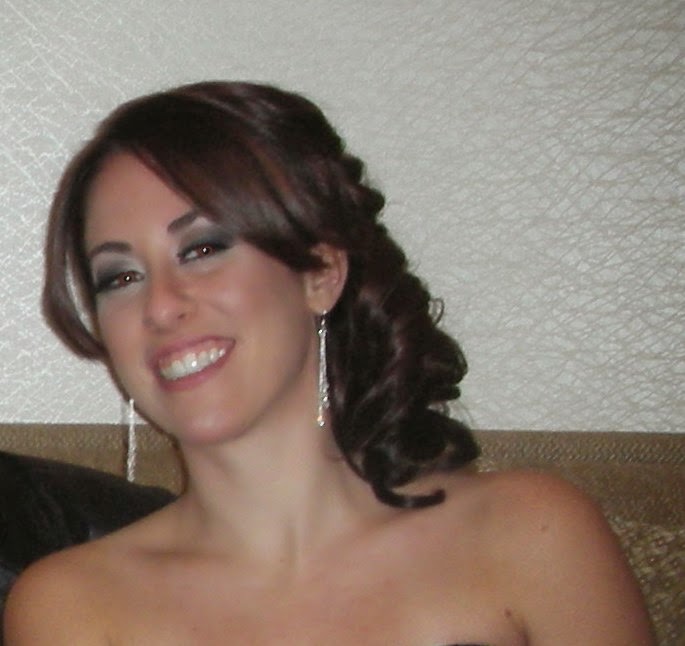 I was born in Philadelphia, PA and grew up in the suburban outskirts of this amazing city. I love anything paranormal and/or supernatural - seriously I live in Philadelphia! For those of you who don’t know, this city is an awesomely haunted place! This healthy paranormal addiction has provided me the motivation to write my first book, “I’ll Be Damned.”

I graduated from Drexel University with a Bachelor's Degree in Psychology and I'm currently working on the Anna Wolfe Series.

I'll Be Damned:
Amazon:
Saved by the Spell:

Book One:  I’ll be Damned:
So some families aren’t close, but even in those that are sometimes there can be secrets.  Anna’s family has a secret and it’s her.  They never told her that she was a witch and now it’s a problem.  She’s being stalked by the Prince of Darkness, one sister is missing, and one is involved... and she just has one month to learn everything she needs to know to survive.  That shouldn’t be a problem, right?

Book Two:  Saved by the Spell:

Anna and her friends: which now include her werewolf lover, a warlock, a shadow-shifter, her sister, a psycic that can see ghosts and a flamboyantly gay man; are on the run from the Prince of Darkness.  Anna is in love with the werewolf and drawn to the warlock, could things get any messier?  Well how about the fact that the wolf-man is an angel?  Now can they survive to save the human race or will they all die trying?

This series is fabulous.  I cannot wait for book three, especially since book 2 ends on a tearjerker...I hate that.  Well written and compelling these books pull you into Anna’s life where you are alternately charmed and worried.  Anna is a herione that has normal doubts about herself.  When she does fight, there are consequences...like fatigue and unconciousness.  She doesn’t think she is good enough.  In other words, she is someone just like you and me.  This is someone I could be friends with, and that is what makes her such a great heroine.  She is totally relatable.

I give these books 5 out of 5 clouds and anxiously await book 3.