Giveaway and Book Review of The White: The Dragon Pearl, book 1 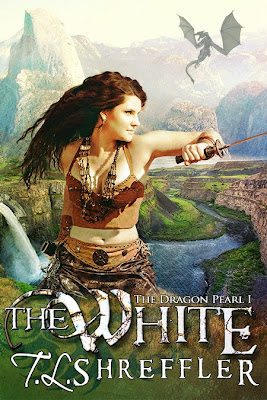 Ever since The White appeared in our valley of Windridge, my people have lived in fear. But today that fear ends. Finally, the King has sent his most elite dragon hunters to kill The White, the last of the imperial dragons.

Since the death of her father, Sienna Foxburn hasn’t felt safe. The White, a fire-breathing imperial dragon, terrorizes the Valley of Windridge with no end in sight. But Sienna isn’t satisfied hiding behind the walls of her keep. She is tired of fearing the dragon, but she can’t fight it alone.

Then a mysterious sorceress and two elite dragon hunters arrive, claiming to be sent by the King. Thus begins the great hunt for The White. Sienna embarks on a dragon-hunting adventure through the exotic Valley of Windridge, all while uncovering secrets and conspiracies that could endanger the entire Kingdom….

T. L. Shreffler is a dragon hunter living in the sunny acres of San Fernando Valley, California. She enjoys frolicking through meadows, sipping iced tea, exploring the unknown reaches of her homeland and unearthing rare artifacts in thrift stores. She holds a Bachelors in Eloquence (English) and writes Fantasy, Paranormal Romance and poetry. She is author of The Cat's Eye Chronicles (#9 Amazon Top 100, #1 Kindle Fantasy) and has previously been published in Eclipse: A Literary Anthology and The Northridge Review. 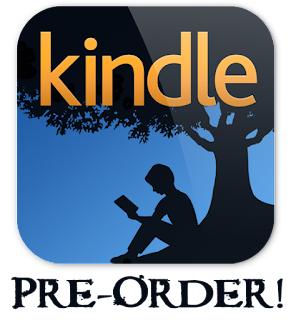 (include link with image: http://www.amazon.com/White-Dragon-Pearl-Book-ebook/dp/B00W2TS78O/) 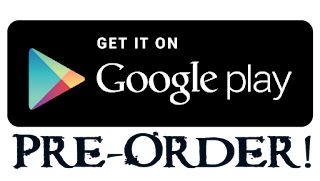 (include link with image: https://play.google.com/store/books/details/T_L_Shreffler_The_White?id=Y0kVCAAAQBAJ&hl=en) 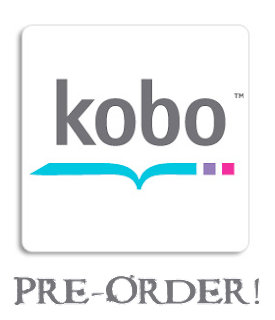 (include link with image: https://store.kobobooks.com/en-US/ebook/the-white-5) 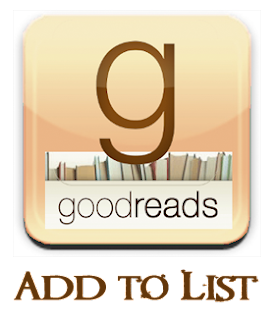 There is  a tour-wide giveaway with four winners: one signed copy, two ebook copies and a $10 Amazon gift card.

James wrestled me to the ground, his thick forearm around my throat, not quite hard enough to choke. “I win!” he declared. “Just say the word, and I'll let go!”

Damn, he was too strong. I tried to reply, but it came out as a garbled squeak. I reached my arms around, trying to get him off my back, but he was too heavy to budge. He pinned me down by pure weight.

We were so distracted by the fight, we didn't notice the wind pick up, moaning through the trees. Branches began to thrash back and forth. My hair whipped into my face.

Then a shadow flew over us.

Pure adrenaline shot up my spine. I threw James to the side, his arms limp from shock. We both stared upward, searching the sky.

A terrible, piercing shriek split the air, a thousand times louder than a bird. The forest fell silent. The wind whipped the trees back and forth as though shaken by giant hands. Several branches snapped off and fell to the ground. 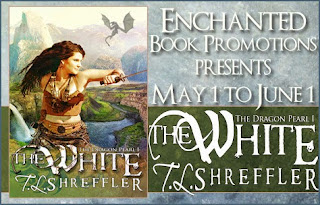 The bowark screamed and took off running. It thundered across the hill at a clumsy, rolling gait. I scanned the sky once, twice, holding my breath. Then, finally, I saw it.

The White circled around a pillar of rock high up on the mountain. This close, it appeared much larger than the distorted beast of my dreams. The shadow of its wings engulfed the entire hillside. Its tail stretched twice the length of its body, longer than the towering trees. The sunset’s glare reflected from its wings, casting its scales in a pearlescent glow.

I couldn't believe my eyes. The dragon had appeared from nowhere!

The sun hovered low in the sky, fading over the opposite ridge of the valley. Nightfall. We had stayed out too long.

I tried to stand up, but James threw me back to the ground, pushing me flat against the grass. “Get down, you idiot!” he hissed. “Its hunting!”

The dragon's tail lashed through the air, snapping several trees in half as it banked and turned. The broken trunks skidded down the hill, upturning rocks and loose dirt, creating a minor avalanche. The rocks bounced downward. James gripped my hand and we braced ourselves. A huge boulder rolled right past us, barely missing our legs.

The bowark kept running. It was painful to watch, like a rock trying to outrun lightning. The White circled once more, then dove from the sky. Its wings created a howling, whistling sound, almost as loud as its screech. It plucked the bowark off the ground in one massive claw, like a hawk scooping up a mouse.

Then, with an elegant twist of its wings, it soared back into the sky. A minute later, it was gone.

I love dragon stories. I grew up on the Dragon riders of Pern and will forever love dragon lore.  In this story a girl gets caught up in forces outside her control.  While she is on this journey she finds out she is more than she first thought.  There is some minor romance, but it is a small part of the story.

The real story is the girl and the dragon.  The dragon both terrifies and fascinates her.  I cannot wait to read more about Sienna and Darius and the last imperial dragon.