Giveaway, Trailer, and Book Review of The Shadow of the Unicorn II: The Deception

Book Review of The Shadow of the Unicorn II: The Deception
Sponsored by Enchanted Book Tours 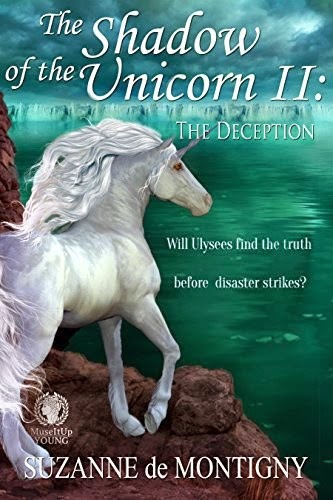 Title: The Shadow of the Unicorn II: The Deception

Ulysees’ breath was ragged, and his heart filled with terror when they galloped toward the herd pursued by an enraged Icarus.

How did the Legacy of Azaria transform into the world fear it has, the unicorns barely existing hidden in the depths of the forest? Why is Icharus, the Great Stallion, so cruel and ruthless? And who is Jaresh, the invisible being who takes away their powers? Angry, the young colt Ulysees and his friend Téo rebel, following an abandoned trail where they’re discovered by humans. Now the entire herd must make an exodus. But Ulysees discovers there’s more danger then just humans when he meets a giant creature who warns them of impending doom…

Award winning author, Suzanne de Montigny, wrote her first novella when she was twelve. Years later, she discovered it in an old box in the basement, thus reigniting her love affair with writing. A teacher for twenty years, she enjoys creating fantasy and paranormal for tweens and teens. She lives in Burnaby, B.C., Canada with the four loves of her life – her husband, two boys, and Buddy the dog.

1.       I talk to my bichon frisé like he’s a normal human being. And yes, Buddy does answer back. (Funny how my mouth moves while he talks!)

2.       When my son took up skate boarding, I thought I’d be the cool mom and learn it too.
Unfortunately, I ended up on my back and paying a visit to emergency.

4.       My favourite season is autumn so I can kick the leaves when no one’s looking.

The Shadow of the Unicorn II: The Deception.

The Shadow of the Unicorn: The Legacy.

The Shadow of the Unicorn II: The Deception

Amazon: http://www.amazon.com/Shadow-Unicorn-Deception-Book-ebook/dp/B00TVTPB50/ref=sr_1_1?s=books&ie=UTF8&qid=1424798163&sr=1-1&keywords=the+shadow+of+the+unicorn+II%3A+The+Deception
MuseItUp Publishing: https://museituppublishing.com/bookstore/index.php/coming-soon/the-shadow-of-the-unicorn-the-deception-detail
The Shadow of the Unicorn: The Legacy
Amazon: 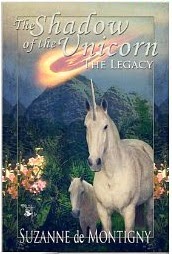 Muse It Up Publishing:
https://museituppublishing.com/bookstore2/index.php?page=shop.product_details&flypage=flypage.tpl&product_id=466&category_id=69&manufacturer_id=230&option=com_virtuemart&Itemid=1

Giveaway
Win a $50 Amazon gift card during the tour.

“It happened many seasons ago—many, many seasons. Some of the older mares still remember. Icarus wanted to be the Great Stallion, but there was already a very powerful one in place named Sampson.”

“So what happened?” asked Téo.

“Icarus had a small following, a group of very young mares who fell for his sense of humour.”

“Icarus had a sense of humour?” Ulysees’ eyebrows shot up in amusement until he forced them down again.

“Yes. He used to be a pretty nice guy until he got ambitious. Then he started rumours with the young mares about how there was a superior being who would take away their powers if they didn’t obey Icarus. After a while, even the older mares started to believe him. It ended in a battle between him and Sampson, and because Icarus was younger and stronger, he won.”

“What happened to Sampson?” asked Ulysees, pretending to chew.

“He did.” Danae made a casual move closer. “Ulysees, you have to listen to me, and listen hard. I may not move with the herd much longer. I’m too old, but I want you and Téo to find the truth. Pretend to go along with what Icarus says to stay safe, but remember that the Legacy of Azaria was not the poisonous thing it is now. It’s up to you to find the true legacy.”

Ulysees’ heart raced. “But how?”

“Find it. Some way, somehow. You’ll feel it inside.”

Danae eyed Icarus. “I have to go before they know I’ve told you.”

Ulysees’ head spun in confusion. He twisted his body around and stared at the herd with new eyes. They’d all been living a lie? His mouth hung open. And it was up to him to find the real Legacy of Azaria?               Why him? His gaze fell on Lilia and Alannah. Should he tell them?

He watched the fillies play in the meadow, their giggles filling the air. Then his hair rose. There was something too terrible for words only a stone’s kick away from them.

Great story told from the point of view of a unicorn.  It’s a story that I grew up with told from a different point of view, although I didn’t find that out until the very end, which was a delightful surprise.

Point for view is so interesting in stories.  I loved that this was told from the point of view of the unicorn.  Besides being the story I had heard, which really isn’t the part I knew.  It is also a story about prejudice, acceptance, and trust.

This product or book may have been distributed for review; this in no way affects my opinions or reviews.
Posted by Wall at 3:15 AM