Book Review of Dwarves in Space 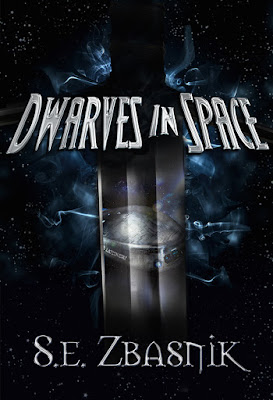 Thousands of years after the jewelry's destroyed, the sword reforged, the dragon ridden, and the indecipherable prophecy translated into a recipe for sugared biscuits, the dwarves turned to that final frontier: space. And along came the elves, orcs, gnomes, trolls, ogres, and those vermin-like upstarts, humans.

Dwarves in Space is Tolkien merged with Hitchhiker's Guide to the Galaxy in a horrific transporter accident.

The Elation-Cru is not the flashiest ship, nor the newest, or even has all of its bolts attached; but she can fly. Well, sort of wade through space, and that's when all the parts are working. She supports a sugar addicted dwarven pilot, an elven engineer, an orcish doctor, a silent djinn, and the lone human trying to hold the entire thing together with duct tape. Variel, the captain, has been hiding from a secret for the past five years and time's finally run out.

When she goes against her common sense and fights to save her onboard assassin/renter from a job gone sour, she finds herself before an ex-colleague that knew her in her previous life as the Knight of the realm. The entire ship is sent on a mad dash across the universe -- from a decaying space station, home to the wackiest species the galaxy has to offer, down to the Orc homeworld, which wouldn't be so bad if Variel hadn't spent most of her previous life fighting in the war against them. Chances of survival are nil and slipping fast.

Author Bio
S. E. Zbasnik has a degree in genetics, which means there may or may not be a horde of monkeoctopi doing her bidding to take over the world. Bringing that scientific approach to the fantasy world is her game, trying to put some common sense into magic and magic into common sense.

She currently lives with her husband and beloved dog, who dress up like Sherlock Holmes and solve mysteries in their spare time. She spends nearly of all her time in Nebraska but that's because it is impossible to leave without finding the lamppost. She lives in a house that has at least four walls and there are some other souls wandering forlornly calling to their lost lives within.

She's a huge video game nerd especially for Dragon Age, Mass Effect, and Bioshock as well as Doctor Who and makes fan art in her down time.

She's a neutral good assassin, so it's best to not get on her bad side.

Win a $10 Amazon gift card during the tour.

“Bys is the name, good person, and maps are my game,” the gnome was a littler larger than a fat house cat, its shoeless ankles kicking into the small stand he perched upon housing a scannable map. Variel passed her hand over it, but the PALM only blinked and shuddered, as if it wanted nothing to do with this place. 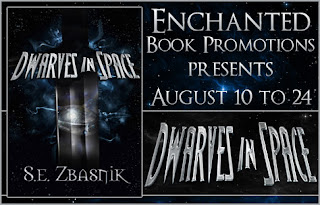 “No good, eh?” Bys rose to its feet and glanced up to her eyes, “Things ne’er updated anyway. What you want, my dear tallwalker, is directions.”

“Is that so…” Variel slipped into her noncommittal ‘I’m just browsing’ voice, “And you just happen to know where I could acquire some I take it.”

Bys slapped his suspenders in place — rather impressive as he forgot to put pants on — and grinned, the gnawing teeth of the gnomes displayed proudly. “Why yes, I believe I can direct you myself!” And then he giggled.

“I see,” she stepped back, knowing when she was part of the game. Every race had their angle, their almost subconscious drive that some scientists claimed was encoded in every strand of DNA. Most never translated it, letting the urge to exchange children for gold, building a house on top of chicken legs, or gnawing upon billy goats languish within the rest of their junk code along with vestigial tails and digesting milk. But there were always a few, usually ready to play it up for tourists, who got their jollies out of dressing the devolved barbarian when they could.

“Where are you going, young one?” Bys asked, as if Variel didn’t easily have a good twenty years on him. “I assure you,” his high voice began to reach into dog toy levels of squeaking as he grew agitated, “I am the only one on this station who can guide you.”

“Uh-huh,” Variel turned to a Bugbear manning a small chips stand and asked, “Could you point me to the ‘Clear Veins’ clinic?”

The Bugbear put down its tongs and glanced at her. The grease of the fry oil drenched its black coat until the goblin bear shone like onyx. “It is down the next aisle, to the right,” it mashed out through an elongated mouth, before it pulled out a lollypop and better enunciated, “Beside the shop that specializes in livers.”

For a moment Variel wanted to joke about whether they were selling, buying, or frying, but thought better of it. On Vargal the answer could be yes to all three. Instead, she nodded her head and thanked the Bugbear. It returned to its greasy life and Bys shook its tiny fist at the goblin that stole away its fun.

I am a huge fan of Doctor Who and “Hitchhikers Guide to the Galaxy,” both of which remind me of this story.  It also sounds a little like the start of a joke:  ‘A human, orc, elf, dwarf, and genie were on a space ship…”  The story manages to be both funny and tense, sometimes at the same time.