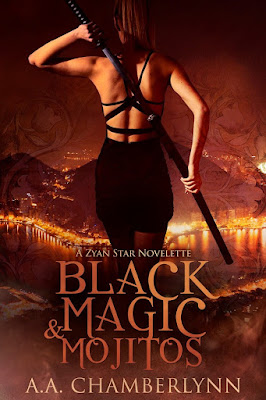 Zyan Star’s latest job is turning into a real nightmare.

When supernatural bounty hunter Zyan Star jets down to Rio to meet a prospective client, everything goes as planned initially. That is, until she finds out the person hiring her is Raoul Cabrera, the half demon/half faery supernatural overlord of Brazil, who rubs elbows with Lucifer himself. And that he’s hired another bounty hunter, Donovan McGregor, to work with her.

Their target is a herd of Nightmares, horse spirits that torment people with visions of their worst fears before devouring their flesh. Zy and Donovan head out on the hunt, but it quickly becomes apparent that their client hasn’t given them all the facts. There’s a pissed-off, powerful witch summoning the Nightmares, and she’s out to exact some serious revenge on Raoul. Zy soon realizes she’s caught in the middle of a lover’s spat between two immensely powerful supernaturals, and it’s not clear whose side she should stand on. As if that weren’t enough, pulling off this job is going to require her to relive her worst fears and summon her own long-suppressed magical powers.

Alexia Chamberlynn lives in Florida. When she's not writing or reading, she can be found playing with horses, eating chocolate and other delicious things, drinking wine, traveling to the next place on her global wish list, or maybe doing yoga. She is represented by Sandy Lu of the L. Perkins Literary Agency. Connect with her at www.alexiachamberlynn.com.

There was a rush and crush of darkness and something that sounded like wings beating. Not the feathery kind, but the heavy, leathery wings of a bat. My head spun as if I’d been thrown into a hurricane. Heat, ice and the smell of earth pressed in around me. Then everything stopped, and light returned.

I was standing in some sort of cave… no, a temple. Both, actually. Stalactites dripped from the ceiling, and carved stone pillars rose up from the floor. A set of rough stairs led up to an expansive dais. Flickering lanterns hung from the walls at intervals. As my eyes adjusted, I could see that Riley and Quinn stood beside me. Donovan, too. He looked as shocked as I felt. So, he wasn’t in on this.

Mr. Cabrelle stood before us, or rather the true form of the creature called Mr. Cabrelle. He still resembled something roughly humanoid. Huge chocolatey velvet wings hovered behind him, and patches of purplish scales dotted his skin. His eyes were the same though, only now I could see the monster on the outside. Was he some sort of demon spawn? I hadn’t sensed anything like that when we first met. But he clearly had magic at his command, deep and ancient magic. The feel of it still shivered over my skin as if I’d walked through dirty cobwebs. 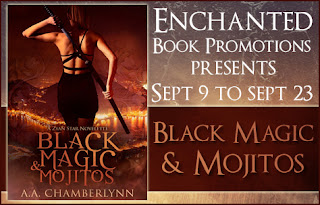 He caught me watching him. “Ms. Star, Mr. McGregor, allow me to introduce my employer, Raoul Cabrera.” With his hand he swept my attention up the stairs, to the back of the dais, where a tall man sat on a chair. A throne really, of yellowed bones and sharp teeth. I almost snorted. Cliché much?

Unfortunately, clichés aside, we were in super deep shit.

Raoul Cabrera was basically the supernatural overlord of Brazil, and a good portion of the rest of South America. Rumor had it he was half demon and half faery, just about the nastiest combination of supes I could imagine. Both cruel, spiteful races, with crazy mad magical skills and an arsenal of other unpleasant talents. One major badass motherfucker, this guy. No wonder he’d used a front to hire me. Never in a million years would I have come otherwise.

Strong female character who has a strong moral center and vengeance.