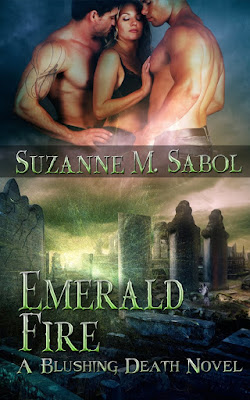 (As the Blushing Death, Dahlia Sabin has overcome much to be with the men she loves but attempting to settle into a new life and juggling two Alpha males isn’t easy, and the strain is starting to show. As the stakes become higher with each new threat, their growing power and Dahlia’s magical ability can’t be ignored by the vampire ruling council.

As bodies start piling up around Columbus and a dark magic makes its presence known, a high-ranking vampire board member invades Dahlia’s territory. A threat? A spy? Isidro’s dark eyes and intentions are dangerous. With the world closing in around them and the threat to their very existence growing, Dahlia, Patrick, and Dean move to solidify their magical bonds. But Baba Yaga wants her due and has plans for Dahlia all her own. Dahlia may be able to survive an army of zombies, but can she out strategize a millennia-old witch and survive with everyone intact? )

The car reeked of fear, filling his nostrils with the savory scent and making his mouth water. The dead man in the truck was still too fresh to reek of death to any human senses but the faint odor of decomposition filtered through the vents, tickling the hairs inside his nose. The woman, bound and gagged behind him, had finally stopped thrashing and sobbing, probably from exhaustion. Thankful for the peace and quiet, he’d almost killed her just to stop her whimpering. But it was too soon and his need of a live body had been the only thing to stay his hand.

Across the street, a soft blue light from the flat screen television flickered through the oversized picture window. With a perfect view inside her home, he watched the two of them, snug on the sofa as if they were any normal couple watching an old black and white movie. The Blushing Death lay back with her feet draped over the large, bald Alpha werewolf’s lap. She was laughing as the man stroked her long legs. If he listened hard enough, he could almost hear the ring of the Blushing Death’s laughter through the double paned windows.

“She seems happy,” he said. Lounging back in the driver’s seat, he twisted his hands over the steering wheel. He’d been watching her since coming into the city three nights ago. She was rarely alone and floated between the Werewolf Pack and the Vampire Colony with an ease that was astounding and unprecedented. She was also guarded constantly by both, making it impossible for him to get close to her. A change of plan was in order.

As he watched the light flicker across her face, a plan formed in his mind, to put them all on edge, taunting and baiting them all to finish her alone. Only after the Blushing Death’s demise could he deal with Patrick and present his gift to his master. An apology of sorts. The dog, however, was of no consequence and no value. A quick and easy death would be best.

The soft roar of an engine rumbled behind him, drawing his attention away from the happy scene through the window. Parking at the curb, a black town car purred, idling. A tall man with jet black hair, more beautiful than handsome, stepped from the front seat and opened the back passenger side door. A second man in a tailored suit, exited the back of the car and unbuttoned his suit jacket. Both men made him take a second look and he licked his lips with the sudden rush of desire that throbbed through his groin. It had been too long since he’d tasted flesh, felt true pleasure.

“Yes, my Liege,” the pretty vampire replied, bowing to the other man from the waist.

Patrick Cavanaugh strode from the car as the delicious vampire closed the door behind him and got back in the car, finally driving away. Cavanaugh was left alone on the sidewalk. Logan could kill him now before anyone in the house even knew what happened. But his orders were to send a message, not just to Patrick but to all the territorial Masters. Insubordination or a coup would not be tolerated and Patrick Cavanaugh was teetering dangerously on the edge of both.

He had to kill the Blushing Death first, make an example of her, of all of them. His master wanted their deaths to be bloody and public so none would oppose the establishment again. He’d promised to make Patrick Cavanaugh suffer. And suffer he would.

Cavanaugh strode into the house and slung his suit jacket across the back of the loveseat. The Blushing Death sat up, leaving her legs across the dog’s lap and Cavanaugh slid in behind her.

Envy burned like a fire in his gut. No one should be that happy, especially a vampire, and not the Blushing Death. A growl rippled through the small space of the car and he realized the sound had come from him.

“Pleezz,” the woman in the back seat whimpered around the gag in her mouth. The fear forcing her blood to race made his fangs throb with hunger. The sound of her anguish relaxed his nerves as the urge to kill all three in a jealous wash of blood fell away. He had a job to do and would prove to his Master he was worth having again. A smile crept across his features, curling his lips into a sneer. He glanced back at the woman in the rearview mirror and met her wide, shining eyes.

“You have a date with a friend of mine,” he snarled, turning the key in the ignition. The engine fired up and he pulled away from the curb. The woman in the backseat struggled, kicking, and thrashing against her bonds. “The more you struggle, the hungrier I get,” he laughed and turned up the radio, whistling along with the melody drowning out the sounds of her blubbering.

Suzanne M. Sabol is the author of Urban Fantasy and Paranormal Romance. She has been writing from the age of 16 when she finished her first full length novel. She is married to her wonderful husband, Ross, Who makes sure her books don’t have too much gore...trust me, there could be more...and lives in a “Slanty Shanty” in Columbus Ohio.

Finally a shifter/vampire book I can get behind.  None of this wolf or vampire decision, both.  The Blushing Death, as Delila is known, finally gets her wolf and vamp both.  And bonding between the three of them gives more power than they expected.

This is a great story in this series.  While I have not read the other books in the series, I was able to follow the plot.  And this book is hot.

I give this book 4 out of 5 clouds and a chili pepper rating of 7, some explicit scenes.