Book Review of Wilhelmina and the Willamette Wig Factory

Book Review of Wilhelmina and the Willamette Wig Factory 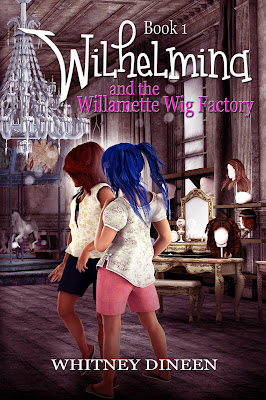 Wilhelmina and the Willamette Wig Factory is Book 1 in the Willy and Tommy Adventure Series. Wilhelmina Snodgrass and her family move to the Willamette Valley, Oregon, against her express wishes. Not only is she sure her life is over, but she's convinced she won't make any friends. That is until she meets her eccentric blue-haired neighbor, Thomasina Andretti. Willy and Tommy become involved in a s conspiracy to reopen The Willamette Wig Factory, with their unsuspecting friend, Georgianna Carbunkle. The plot, however, is orchestrated by three of Willy's ancestor's, from beyond the grave. Scrapes, mishaps and the unforeseen occur; including becoming sworn enemies with Tiffany Peterson, the most popular girl in the seventh- grade, a crush on super-stud, Jamie Armstrong and a mysterious carousel. Willy and Tommy have it all-mystery, revenge and romance. Monteith, Oregon, becomes the stage for adventure beyond their wildest dreams!

While attending the University of Illinois in Chicago, Whitney Dineen was discovered by a local modeling agent and began an unexpected career as a plus-size Ford model. She modeled in New York City before moving to Los Angeles with her husband.
When she wasn’t modeling, she was in the kitchen, baking delights to share with friends. Soon, her friends began asking her to send baskets of her wonderful candies and cookies to business associates, agents and production studios. Word spread like wildfire, and the rest, as they say, is history. Whitney’s sensational creations are still in great demand by her loyal celebrity clientele.
During “The Hollywood Years,” Whitney was bitten by the writing bug and started creating characters that are inspired by strong women with a great sense of humor.
In addition to her love of chick-lit, Whitney has also written a series of adventure books for middle readers The first of which, Wilhelmina and the Willamette Wig Factory, is now available.
Whitney and her husband, Jimmy, have recently relocated to the beautiful Pacific Northwest to raise their children, chickens and organic vegetables. 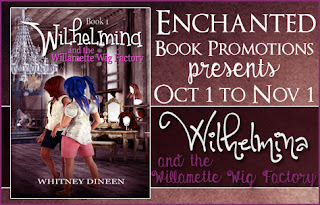 Cautiously the two girls finally climbed up the fire escape. They stopped at the first landing and
peeked through the second-floor window. All they saw was old factory equipment. Then, even more nervously, they continued up to the third floor. They stopped on the landing to catch their breath and that’s when they heard the music. Clinging together, they looked through the window. What they saw nearly caused them both to fall over. The room they were looking at was a very lovely Victorian parlor. There were three people in the room; a beautiful lady about her mom’s age and twvo girls about her and Tommy’s age.

Aurelia looked out the window and saw the girls. With a big smile on her face she greeted, “Willy, Tommy, come in! We’ve been expecting you.”

Great, Willy thought. They were expected by ghosts. The Willamette Valley was proving not to be a normal place.

This is  darling book about accepting yourself for who you are wrapped in a funny, and poingent story.