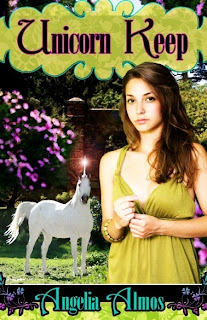 Jiline of Ainsley is dismayed when her best friend is selected by the mages to become a unicorn keeper at the Keep, an isolated mountain fortress. Especially since Madelen is in love and engaged to the richest boy in the village. Jiline on the other hand has no prospects of marriage or a trade in their small village. So, she comes up with a plan to take Madelen’s place at the Keep and hopefully flunk out of unicorn keeper training before the mages can discover the deception. Unfortunately, the unicorns have their own plans for her.

Mage Herrick, son of the Keep Mage, returns home to the Keep as the trainee keepers arrive. A chance encounter with Jiline, who he believes is Madelen, on the trail sparks a magical connection between the two. Knowing he can’t feel a magical draw to someone who has no magic, he tries to prove Madelen (Jiline) has magic within her. His attention brings unforeseen complications for both of them. 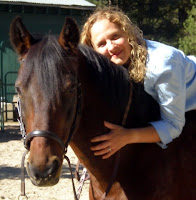 Angelia Almos formed a lifelong passion for horses at the age of five when she talked her parents into riding lessons. Horses often play a prominent role in her young adult fantasy books. She also write horsey nonfiction and space opera. She lives in the Sierra Nevada Mountains with her husband, two daughters, two dogs, two cats, and one pony (she often thinks of bumping that number up to two). 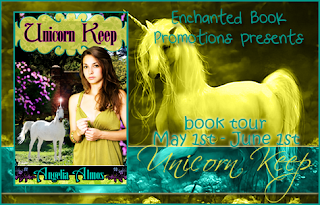 Be sure to enter the giveaway below.
Posted by Wall at 3:00 AM