Not my usual cup of tea, but a good read

Book Review of Shadow on the Wall by Pavarti K. Tyler 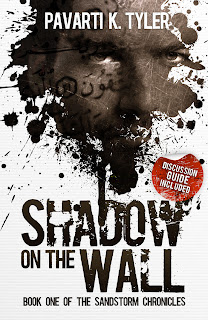 Controversial and daring, Shadow on the Wall details the transformation of Recai Osman from complicated man to Superhero. Forced to witness the cruelty of the Morality Police in his home city of Elih, Turkey, Recai is called upon by the power of the desert to be the vehicle of change. Does he have the strength to answer Allah's call or will his dark past and self-doubt stand in his way?

Pulling on his faith in Allah, the friendship of a Jewish father-figure and a deeply held belief that his people deserve better, Recai Osman must become The SandStorm.

In the tradition of books by Margaret Atwood and Salman Rushdie, Shadow on the Wall tackles issues of religion, gender, corruption and the basic human condition. Beautiful and challenging, this is not a book to miss.

Author Information:
Pavarti K Tyler is an artist, wife, mother and number cruncher. She graduated Smith College in 1999 with a degree in Theatre. After graduation, she moved to New York, where she worked as a Dramaturge, Assistant Director and Production Manager on productions both on and off Broadway.
Later, Pavarti went to work in the finance industry as a freelance accountant for several international law firms. She now operates her own accounting firm in the Washington DC area, where she lives with her husband, two daughters and two terrible dogs. When not preparing taxes, she is busy penning her next novel.

Throughout history, literature and the art of story-telling have influenced politics, religion and culture. The power of the epic tale is universal. Why is it that those who never read The Iliad know Helen of Troy? Her story, Homer’s story, transcends the written word and has become a part of our human lexicon. The power of the written word is undeniable and Pavarti is honored to be part of the next wave of literary revolution.

Book Excerpt
Knock. Just one solid sound.
Recai sat up too quickly and fell back against his mattress gasping as Rebekah stuck her head into his small room, her face creased with worry and fear.
“Cover yourself and stay silent,” she whispered before closing the door and rushing back into the living room to retrieve her burqa and open the door. Recai heard the movement of the heavy fabric she wore on top of her house dress as she moved across the room to greet their visitor. He wondered if she had retrieved her father’s gun which he’d overheard Hasad say was under the couch in the living room.
Before hiding beneath the thin sheet that covered him, he reached down and pulled the rug from the floor and threw it across his legs. He covered his head and melted against the wall with the pillow on top of his upper body. Feeling foolish, Recai laid there, wishing he had his ID, his phone, anything to help bribe his way out of this situation if it was indeed the RTK at the door.
Perhaps it’s just a neighbor, he thought. A neighbor come to ask after Rebekah’s father’s ealth or to borrow some salt. His attempt at rationalizing the unexpected visit did not quell his fears. The RTK made a habit of performing home inspections, especially if they suspected a woman alone. It wasn’t a safe time for anyone under the jurisdiction of Mayor Yilmaz.

This book is outside the norm of what I usually read.  It was a difficult read for me.  The topic is one we usually avoid.  Generally we say don’t talk to people about religion or politics, and this book has both.  It also has violence and race issues that are very pertinent to the world we live in today.  There is a lot on the news about the Middle East and the problems between Muslims and Jewish people.  These are difficult topics to explore in any circumstance, which makes this book unique.

I do not think this is a book I would have normally just picked up to read in the store as I tend to avoid books that make me uncomfortable and this book did that.  However, I am glad I read it.  While the topics are traditionally taboo, this book provides great insight and understanding that people are people no matter what their religion or political views.

Evil exists in the world and we cannot avoid it; however we can strive to understand where it is coming from and learn from it to become better people.  That is the message of this book.  While I would not have necessarily chosen this book to read, I am glad that I did.  It has broadened my view of the world and, hopefully, helped me to see into a world I will never live.

I give this book 4 out of 5 clouds despite being such a difficult book to read.  This is NOT a book for children.  It is definitely for adults as the topics described are serious and not for young people.  The discussion guide in the back was invaluable.
Posted by Wall at 7:27 AM