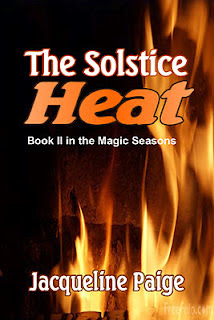 Book Synopsis:
Kasey is a woman that exudes energy and brightness; she is as equally passionate when angry as she is when she’s happy. The energy she carries from life comes through in all her magical workings with spells and stones, giving them great magical strength. She is a dreamer and often wishes she could re-write her own story so that she was charming and sophisticated enough to be with a certain wealthy male lawyer she wants more than anything else.

Chris is a force of strength and experience that is carefully hidden behind the easy mannerism he has adapted so carefully.  There is nothing he cannot do where magic is concerned and he has tried all manner of things, whether right or wrong.  His fortune has left him wanting for nothing else in life, except the one thing money can’t buy him, the woman he feels too unclean to approach.
Separated by two different life styles yet their passion and magic ignite sparks hotter than the Solstice heat.
Can they work out a way to be together as they try to stop a killer from striking again?

About the Author:
Jacqueline Paige
I am a world class multi-tasker, a mother to five adventurous and unpredictable children, a cafe manager and I have a colossal imagination that allows me to step outside of reality into a world of paranormal romance with just a touch of suspense. Writer of all things paranormal, mythical and magical. Reader of anything!! http://jacqpaige.webs.com/

I have come to love all books by Jacqueline Paige.  She is definitely a new favorite author.  Her books are charming, intriguing, spicy (in all the right ways), and good reads.  When I started reading “The Solstice Heat” I hadn’t really paid attention to the fact that it was the second book in a series.  I’m due to review the first book on April 21, 2012, but probably should have reversed the order.  (It should be noted that these books were received from the publisher for review at no cost to the author… however, I would pay to read books by Jacqueline and I don’t say that about many writers… love free kindle books, but I digress).

This book stands alone, but will probably be even better if read within the series.  I was immediately drawn into the story.  How can you not want to read more when the first paragraph is:

Kasey checked her bag for the fourth time. What time were they supposed to be picking her up? She was tired from staying up all night working a spell. Nervous and scared about going to Solstice, where a killer was going to be, she glanced at the clock again and tried to exhale slowly.

I was hooked.  The book really drew me into the lives of these 8 friends who love and take care of each other.  The writing used such skill that it was easy to picture myself there in the story living beside these friends.  I continue to be impressed with Ms. Paige’s skill and weaving the characters and story together to paint such a wonderful picture. Come back next Saturday to hear about book 1 in this series.