Affair of the Porcelain Dog Promotional 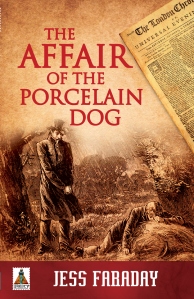 For Ira Adler, former rent-boy and present plaything of crime lord Cain Goddard, stealing back the statue from Goddard's blackmailer should have been a doddle. But inside the statue is evidence that could put Goddard away for a long time under the sodomy laws, and everyone's after it, including Ira's bitter ex, Dr. Timothy Lazarus. No sooner does Ira have the porcelain dog in his hot little hands, than he loses it to a nimble-fingered prostitute.

As Ira’s search for the dog drags him back to the mean East End streets where he grew up, he discovers secrets about his own past, and about Goddard's present business dealings, which make him question everything he thought he knew. An old friend turns up dead, and an old enemy proves himself a friend. Goddard is pressing Ira for a commitment, but every new discovery casts doubt on whether Ira can, in good conscience, remain with him.

In the end, Ira must choose between his hard-won life of luxury and standing against a grievous wrong.

The Affair of the Porcelain Dog has been short-listed for a Lambda Award in the category of "Gay Mystery."
http://www.lambdaliterary.org/llf-news/24th-annual-lambda-literary-awards/

Book Excerpt From the novel The Affair of the Porcelain Dog, published in June 2011 by Bold Strokes books.

What self-respecting housebreaker sets off wearing a Trinity scarf, you might ask? Blame Goddard’s sentimental streak. He had taught at Cambridge once, and though he refused to talk about the experience itself or the circumstances of his dismissal, the scarf meant a great deal to him. You might also wonder what sort of imbecile takes a shiny private hansom to the building he intends to burgle. A necessity, I’m afraid, unless he intends to walk. The pawnshop stood nearly five miles away in Miller’s Court, and no cabbie in his right mind ventured down that wicked quarter mile after dark. The streets were deserted, and the weather was clear. Not half an hour later, we had left the red brick houses and well-tended gardens of York Street behind, and the rubbish-strewn East End closed around us in a cocoon of filth and desperation.

I instructed the driver to let me out in front of the Blue Coat Boy pub, two blocks removed from my destination. An excited throng had gathered around the entrance–another fight, no doubt–and I was able to pass by unnoticed. Closer to the shop, jolly old Do-as-You-Please Street, possibly the most lawless quarter mile in London, was quiet. I strode up to the front door as if I owned the place–the only way to break into a building in plain sight—slipping my picklocks into my hand. Seconds later, I nudged the door shut behind me. Silence descended, and I relaxed, knowing I’d be able to go about my work in peace.

The word ‘dollyshop’ might conjure images of china-faced pretties with real hair for a little girl to comb, and blue eyes that open and close. This shop belonged to a grubby matron who doled out ha’p'ny loans against objects that were hardly worth that. Crates of rust-scabbed metal were stacked as tall as a man along the back wall. The other walls were lined with ill-fitted shelves, bowing under haphazard loads of mildew-encrusted boots, stiff and stained rags, salt-encrusted horse collars, and what appeared to be bones. In the center of the room, piles of rubbish sat where they’d been dropped, layers of dust testifying to how long they’d been there. An attempt had been made to organize some of it into bins, but the bins were already overflowing with towers of detritus threatening to topple at the slightest breath. The dog could have been anywhere in that mess.

Tugging at my waistcoat, I picked up a fireplace poker with a missing handle and began prodding the chaos, listening for the telltale clink! of metal against porcelain. Forty sweaty minutes later, I was bored as hell and my eyes burned from the dust. I was tempted to declare the mission a failure and take the carriage back to York Street for whiskey and a sympathetic fuck. But if we didn’t put paid to the blackmailer, it would be the end of both whiskey and fucking for a good long time. Sighing, I fixed my eyes on a stack of bedding gradually being devoured by mildew and raised the poker.

It was then I heard the footsteps.

I mightn’t have noticed them at all, had they not been the only footsteps that I’d heard since I’d arrived. Quick and sure, with the weight of a man, and the confidence of someone who could afford a stout pair of boots, the footsteps stopped directly before the door.

I flew back to the front of the room, dodging perilous mountains of rubbish, and flattened myself against the doorjamb. The footsteps didn’t have the righteous clip-clop of a Whitechapel bobby. But what were the chances someone else would decide to burgle, on the same night as I, the same down-at-heel junk shop? I swiped a damp clump of curls from my forehead, chafing against the overcoat. A prickling sensation crawled over my nether regions– the itch that had come to plague me over the past few weeks was making its presence known. Just in case I’d forgotten. Resisting the urge to claw at myself with my free hand, I felt instead for the sharpened length of pipe I used to carry on my belt during my Whitechapel years.
It was, of course, in my trunk back at York Street, sod it all!

From somewhere near my right hip came the grind of metal against metal. Slowly, the door creaked open, spilling a stream of gaslight across the dusty floor. My muscles tensed with the urge to flee. I’d not courted physical confrontation since Goddard had taken me into his home two years before. I hadn’t missed it. A single, shiny boot breached the doorway before stopping, suspended as though testing the air.

“What in blazes?” the other man exclaimed as the poker swept his cap back onto Dorset Street and smashed into the doorjamb with a force that left my left side ringing.
While I was still picking splinters from my teeth, the man sprang up next to a box of unraveling straw bonnets, straightening his jacket and smoothing his neat mustache with indignant little grunts. He squinted in my general direction, his expression registering confusion and then irritation.

“Adler?” he sputtered. “What the deuce are you doing here?”
“Lazarus?”

Only Timothy Lazarus would respond to such an attack with euphemism. And with a perfectly executed defensive roll. Disgusted, I kicked the door shut and slammed the bolt home.
Author Information: 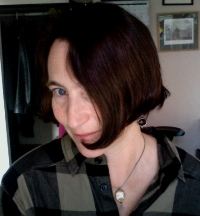 Jess Faraday is the author of one novel, three book translations, a handful of short stories, and numerous nonfiction articles.

She is a graduate of the University of Arizona (B.A.) and UCLA (M.A.). Since then, she has earned her daily bread in a number of questionable ways, including translation, lexicography, copyediting, teaching high school Russian, and hawking shoes to the overprivileged offspring of Los Angeles-area B-listers.