Cover Reveal for "The Life and Death of Lily Drake"

Cover Reveal The Life and Death of Lily Drake 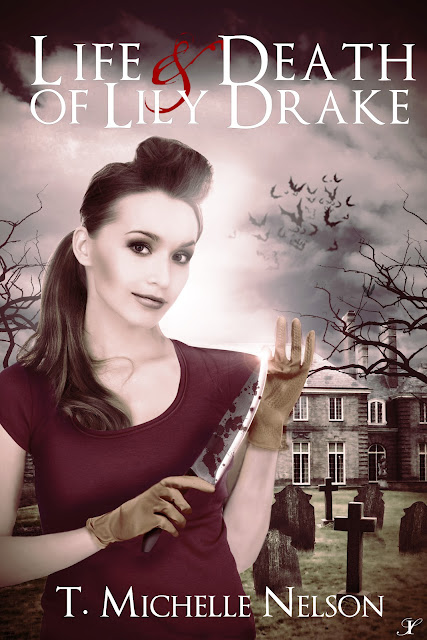 When single mom Lily Drake mistakes a vampire for her blind date, she will soon find the biggest surprise of all isn’t that he is well dressed and handsome.   The manly immortal on her arm has been watching Lily since she was a child.  Being the only offspring born of two human bloodlines known for making the strongest and most fierce vampires, Lily has been prophesied as the savior for the entire vampire society.

Simply making ends meet, raising her son and keeping her name out of the PTA gossip mill had always kept Lily’s hands full, but now she must also fight to stay alive.  Vampire society pushes for her to join their ranks, yet the undead who fell from the society’s path want her dead.  Choosing between humanity and immortality is only one hard decision that befalls Lily.

The Life and Death of Lily Drake is the story of a single mom, the humorous mistakes a newly single divorcee makes when reentering the dating scene, and the choices a woman makes between love and family.

T. Michelle Nelson was born in 1974 and raised in rural Kentucky.  There she began writing short stories and music at an early age.  She attended college in Kentucky, changing majors seven times because of her diverse interests.  Finally she settled on Education with an emphasis on Fine Arts and Literature.  After graduation, Nelson taught school for a few years and eventually found herself managing a company.

In 2011, encouraged by a childhood friend, Nelson penned the first novel she felt strongly enough to submit to publishing houses, a paranormal romance called The Life and Death of Lily Drake.  A single title romance, the book begins a series Nelson hopes to have out in the future.
Posted by Wall at 3:00 AM