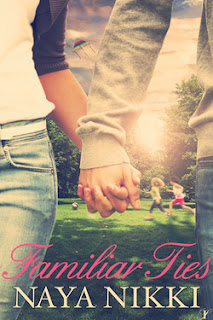 Max West is a widower raising Phoebe, his four-year-old daughter. Phoebe has to live with the fact that the day she was born is also the day of her mother’s death. As her fifth year without her mother approaches, Phoebe finds solace in her godmother, Amy Riley, and her daughter, Grace Crawford, another single parent family.
Amy Riley is a successful fashion designer who spends most of her days raising her four-year-old daughter, Grace, while her wayward boyfriend is travelling the world making the next best film. As the fifth year without her best friend looms she finds comfort in her ex-boyfriend, Max, and his daughter, Phoebe.These two “broken” families have a tough week to face as the dreaded day approaches.
However through their past, present and debatable future will their choices affect the outcome both parents clearly want and are simply denying? Or will Phoebe and Grace lose the only “whole” family they have ever known?
Excerpt 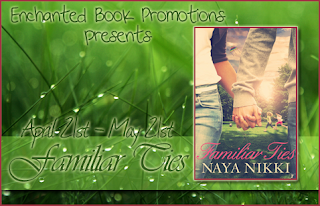 He chuckled as he stood behind Amy, who was trying to figure out the new camera. Grace and Phoebe were posed perfectly on the sofa like little angels, big smiles showing rows of shiny white teeth, with the odd one or two missing. “You see,” he showed her. “There's this new, fancy thing called a timer. This means that all of us can be in the picture, including you.”
She playfully swatted him, as he jumped back, “Oh zip it.” She laughed, “I look a mess. Anyway I want a picture of you three for my desk, not me.”
Grace sat up as she swung her little legs off the edge of the sofa, her feet not even scraping the floor. “Come on, Mommy! Pwease?” She was missing her two front teeth and therefore she couldn’t pronounce her L’s properly. Amy thought it sounded so cute and secretly hoped that they’d never grow back.
How could she possibly say no to her little darling? She watched as Grace began to pout and bat her big, grey eyes at her. It was her infamous look that could make anyone fall for her, including her mother and her Uncle Max.
“No, not the pout,” she joked. “Anything but that, Gracie you know I can’t resist that cute little pout of yours.”
Once Max finished setting the timer, he curled his fingers around Amy's pale bangle covered wrist and pulled her towards the girls and the sofa. As they both sat down, on either side of the girls, he leaned over the girls’ heads to whisper, “I taught her that pout.”
“Yes, I know,” she replied. “Because that’s how you got Anna to fall for you.” She was about to laugh when she realized what she’d said. There was a moment of silence as both contemplated the loss of Anna. “Sorry,” she whispered to him. “I shouldn’t have said that.”
“It’s fine,” he whispered back, before he could say anymore Phoebe crawled onto his lap. He smiled and saw the splitting image of his deceased wife staring back at him. He didn’t mind that Anna was gone, because she’d left him the most precious of gift. Amy smiled as she lifted Grace onto her lap. Both parents shuffled closer together as a unit.
“How long do we have, Daddy?” Phoebe asked, as she snuggled into her father’s chest.
“Thirty seconds,” he answered. “Can you smile big for me?” he asked.
Phoebe nodded as she smiled her massive toothy smile and reached for Grace's hand. “You too, Grace!” Phoebe instructed her friend. “Smile really, really big!”
For a moment, Amy remembered Anna again. They’d both been only eight years old when they’d sat and posed for a different camera. Amy still had that picture on her bedside drawer, next to one of Phoebe and Grace as babies. 'Smile real big,' Anna had said as she’d tilted her head against Amy’s to become one.
The smile on Amy's face wasn’t a sad one anymore. She was fortunate that she could feel Anna’s presence, through her charming daughter.
As she looked at the camera, she hadn’t realized that Max had put his free arm around her waist, pulling them closer. The camera started to blink, indicating to be ready. “Ready?” she asked them. “On the count of three, okay? One…Two…”
“Three,” they all said together, smiling big for the camera, to produce the perfect family photo, to anyone who didn’t know them.