Book Review of Feasting with Panthers by Lyle Blake 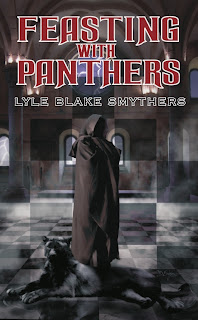 We found the first one-eyed man at dawn...

So begins the highly original fantasy tale of warrior poet Catalan, when he and his band stumble upon a handsome acolyte near death in a mountain pass. But when the acolyte reveals his mystical vision, the
poet finds himself at the center of a War Game between two mysterious sorcerers. To unravel the mystery, Catalan and the agents of the War Game must seek the missing pieces of an enchanted chess set in a quest complicated by deceit and treachery, in which nothing is what it seems.

Ingeniously weaving together citations throughout the text from a variety of sources ? including Yeats, Milton, Joyce, Poe, Baudelaire, the King James Bible and many more ? author Lyle Blake Smythers serves up a truly literary feast.

“There are three smiles more terrible than frowns:
The smile of snow melting,
The smile of a treacherous woman,
And the smile of a panther about to feast.
–variation on a fragment from a set of ten triads, ninth century Ireland”  (from the book) 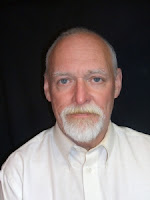 Lyle Blake Smythers is an actor, writer and librarian in the Washington, D.C., area. Since 1976 he has performed in over 100 stage productions, including three appearances at the National Theatre. He has published fiction, poetry, satire and literary criticism in Manscape, FirstHand, Playguy, The William and Mary Review, Insights, School Library Journal and Children?s Literature Review. He is a
former children?s librarian and is currently providing cataloging support for an ongoing project at the Library of Congress.
Book Review: 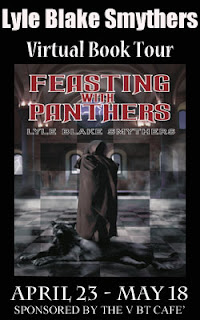 Let me start by saying the in addition to being a bibliophile (one who loves books), I am a Logophile (one who loves words).  I have had a life-long love affair with words.  I love new and unusual words and finding out the meaning of words.  I used to get in trouble in school because my vocabulary was so advanced for my grade that teachers used to think I either copied someone else’s paper or had my parents do it for me (as if that would happen).
This book is perfect for a logophile.  There are marvelous words, almost all real honest to goodness words, that trip off the tongue.  If you or your reader has a limited vocabulary do not worry as almost all new and unusual words are explained immediately following the word.
This story is set in a fantasy land reminiscent of Middle Earth.  The story is told from the point of view of a poet soldier who is not initially part of the quest, but is quickly pulled in.  The soldier is quickly drawn into the quest, but the story is focused on a trio of young men who are the quest takers.
At times the plot got confusing, and there are a lot of different people in the story to manage remembering.  In addition, at times the story is confusing or drags, but ovrall the stoy is a good one.
I give this book 4 out of 5 stars, if only for the wonderful language.
Posted by Wall at 2:25 AM