Review of Shaprie Messages: The Writing on the Wall

Book Synopsis:
Sharpie Messages: The Writing on the Wall 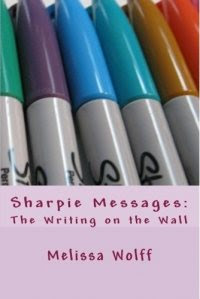 “I wanted to tell you a story. Can I tell you a story?”
“Sure.” I said, getting a little more comfortable. “I love listening to stories.”
“Just a short one.” Xavier pulled me towards him until I was resting on his shoulder. Despite the fact that he was poor and lived in an old abandoned house, Xavier always looked cleaned and smelled perfect. I had no idea how he did it. Even his shirts were as clean as any teenage boys clothes were. “Okay it all started with a man and a woman. They met when they were fifteen, both in the same math class together. He was the captain of the football team and she was the nerdy girl. It didn’t matter their status thought because they were in love. For years they danced around it, neither of them really saying what was in their hearts but instead they were waiting for the other to admit it first. Finally when they were our age, the man finally told the woman that he loved her and had for four years. Of course the woman admitted she felt the same way. Soon after they got married and lived happily ever after.” Xavier said. He kissed my forehead. “Those people were my parents.”
“Color me surprised.” I said teasingly. Xavier pulled out something from his pocket and handed it to me. It was a necklace with a pewter stone in it. On one side of the stone there was a moon and on the other side there was a sun.
“This is really pretty, Xavier.” I told him and tried to hand it back to him. He didn’t take it but instead kissed my nose this time.
“My father gave that to my mother on their tenth anniversary of knowing one another.” Xavier told me. He played with my hair that was fanned out on his chest. “Though it looks cheap, there was such a significance to this necklace that my mother didn’t care that it didn’t cost much.”
“What was the significance?”
“My father used to say that he was the moon and my mother was the sun.” Xavier fingered the necklace that was resting in my hand. There were tears in his voice.
“What did he mean?” I asked. I ran the tips of my fingers over his chest.
“He said that it meant that he couldn’t shine without her.”
“That is so romantic.” I said, my breath catching. Xavier took the necklace and put it around my neck. “My father also told me that one day I should take this necklace and give it to the one.” Xavier paused and the room was deathly silent. You could hear a pin drop. “The one is you Chastity so I want you to have it.” Xavier whispered. A lump formed in my throat and tears welled in my eyes. “I promise you that I will always be there for you. I’ll be your moon if you promise to be my sun.”
“I promise.” I said as I twisted around. “I promise.” I kissed him then and let all my emotions come out with the kiss.
(posted from Author’s website: http://melissamwolff.com/published-novels/sharpie-messages-the-writing-on-the-wall/)

Biography
I'm 24 and a self-published author
Description
I'm hoping to promote my writing and my novels by starting this fan page. I want to get my name out there as best as I can.
Favorite Books
Nora Roberts, Cathy Hopkins, Julia Quinn, Danielle Steel, J.K. Rowling

Book Review:
Okay, so I signed up to win this book in a giveaway and the author sent it to me to review.  I was totally shocked, but OMG I loved this book.  I know I wasn’t expecting to be quite this affected by this book.  I laughed (out loud… and I rarely do that when reading), I wanted to slap people in the book (but I do that often… in fact I frequently talk to characters in the books, or movies, or tv… generally hoping no one other than my family who know I’m crazy hear me) and I cried.  I mean, tears dripping off the face, have to stop and blow my nose multiple times, cried.  LOVE it.  Yes, you read that part about me being crazy right?  I love a good cry and a book that takes you to that emotional level.

Now, that said, I have to read the next book now and find out what happens next.  I was so sad and it just has to turn out okay.  It has to, or someone is getting slapped.  Don’t get technical and tell me I can’t slap a fictional character… I WILL figure out how.

Okay, wild raving side, this book is extremely well written.  It makes you care about the characters and worry about if they will make it out okay on the other side.  The book is told in a long flashback.  The main character has a long flashback to her life and this major event that had such a huge impact on her.  This flashback happens the night after attending a friend’s wedding and she find a new clue.  One she hasn’t seen before because she didn’t want to deal with the pain.  And this new clue is a game changer.

I give this book the rare 5 out of 5 clouds, but don’t recommend it for younger readers because of the sexual content.  Not that it’s illicit, but rather because parents will want to talk to their kids about what they read about and the issues that arise from having sex when you are young.

This product or book may have been distributed for review; this in no way affects my opinions or reviews.
Posted by Wall at 2:30 AM