Giveaway and Book Review of ABSOLUTION

With the vampire world on the brink of civil war over the scarcity of untainted human blood, battle lines are being drawn between the once peaceful vampire and human enclave of Penton, Alabama, and the powerful Vampire Tribunal.

A Scottish gallowglass warrior turned vampire in the early 17th century, Mirren Kincaid once served the Tribunal as its most creative and ruthless executioner—a time when he was known as the Slayer. But when assigned a killing he found questionable, Mirren abandoned the Tribunal’s political machinations and disappeared—only to resurface two centuries later as the protector and second-in-command of Penton. Now the Tribunal wants him back on their side—or dead.

To break their rogue agent, they capture Glory Cummings, the descendant of a shaman, and send her to restore Mirren’s bloodthirsty nature. But instead of a monster, Glory sees a man burdened by the weight of his past. Could her magic touch—meant by the tribunal to bring out a violent killer—actually help Mirren break his bonds and discover the love he doesn’t believe he deserves?

It’s a town under siege, a powerful warrior in a battle with his past, and one woman who can make the earth move—literally—as the Penton Legacy continues.

Following a worldwide pandemic whose vaccine left human blood deadly to vampires, the vampire community is on the verge of starvation and panic. Some have fanned into rural areas, where the vaccine was less prevalent, and are taking unsuspecting humans as blood slaves. Others are simply starving, which for a vampire is worse than death—a raging hunger in a creature too weak to feed.

Immune to these struggles—at first—is Penton, a tiny community in rural Chambers County, Alabama, an abandoned cotton mill town that has been repopulated by charismatic vampire Aidan Murphy, his scathe of 50 vampires, and their willingly bonded humans. Aidan has recruited his people carefully, believing in a peaceful community where the humans are respected and the vampires retain a bit of their humanity.

But an unresolved family feud and the paranoia of the Vampire Tribunal descend on Penton in the form of Aidan’s brother, Owen Murphy. Owen has been issued a death warrant that can only be commuted if he destroys Penton—and Aidan, against whom he’s held a grudge since both were turned vampire in 17th-century Ireland.  Owen begins a systematic attack on the town, first killing its doctor, then attacking one of Aidan’s own human familiars

To protect his people, Aidan is forced to go against his principles and kidnap an unvaccinated human doctor—and finds himself falling in love for the first time since the death of his wife in Ireland centuries ago.

Dr. Krystal Harris, forced into a world she never knew existed, must face up to her own abusive past to learn if the feelings she’s developing for her kidnapper are real—or just a warped, supernatural kind of Stockholm Syndrome in which she’s allowing herself to become a victim yet again.

Susannah Sandlin’s REDEMPTION is the first in the Penton Legacy series. Book two, ABSOLUTION, will be out September 18, and book three, OMEGA, on December 18.

Susannah Sandlin is the author of paranormal romance set in the Deep South, where there are always things that go bump in the night.
A journalist by day, Susannah grew up in Alabama reading the gothic novels of Susan Howatch and the horror fantasy of Stephen King. (Um…it is fantasy, right?)
The combination of Howatch and King probably explains a lot. Currently a resident of Auburn, Alabama, Susannah has also lived in Illinois, Texas, California, and Louisiana.

What was Matthias thinking, throwing a human woman in the cell with a vampire who’d been locked up and starved for over a month? 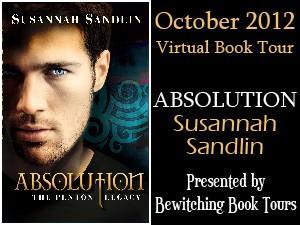 Mirren waited on the bench, his back against the wall, his head down. Waited until Matthias climbed the steps, slammed the door, clicked the dead bolt home. Waited until he could get control of the hunger that had begun raging the second the woman stumbled down the stairway. She was unvaccinated, and he wanted nothing more than to take her, blood and body, until there was nothing left.
If he did that, he’d be no better than the version of Mirren Kincaid he’d tried so hard to leave behind. He’d be the Slayer again. His hands could too easily remember the mindless sweep of the sword, the heavy fall of the battle-ax, the controlled back-thrust of a heavy firearm. If the cold darkness ever fell over him again, he feared he’d embrace it.
“Mister, you awake?”
Shit. She would have to be a talker. Mirren hated a talky woman. They always expected you to talk back.
He raised his head slowly and caught his breath. She was young, maybe mid-twenties, and pretty in a rode-hard kind of way.
“Your eyes are silver—I’ve seen enough vampires since I was kidnapped to know when your eyes get lighter, it means you’re hungry. But I’ve never seen any like yours. How long has it been since you ate? Umm…Make that how long since you drank?”
If the stupid woman kept walking toward him, he wouldn’t be held responsible. “Stay where you are.” He narrowed his eyes at her, thinking. How could she help him without sending his need so far over the edge he lost control of it?
She eeked when he shifted on the bench and turned his back toward her. “Untie me.”
She stumbled a little when she reached the bench and sat hard. The woman was stoned out of her gourd. He could smell the drugs on her.
“Your wrists are all torn up. That has to hurt.” She sat on the bench behind him, and Mirren breathed in her scent with his eyes closed. Damn, but he wanted to feed so badly his muscles ached.
She muttered as she worked, her drug-addled fingers slipping off the rope. “You’re so big that I’m surprised this rope could hold you. I should be able to…Let’s see here, it’s too dark. Man, this is funky rope.”
“Stop yapping, start untying.” She had that broad, soft Southern accent he found sexy, but she used it way too much.
“Yeah, yeah, okay.” She tugged harder on the ropes, burning his sensitive wrists with each pull. “Sorry, sorry. Why is it burning your skin like that?”
Mirren growled and spoke through gritted teeth. “It’s laced with silver, and I’m a freaking vampire. Just untie me.” Damn, he had to get himself under control, or he’d scare the woman to death and she wouldn’t finish freeing his arms or feed him either one.
“Well, you’ve got the funny eyes, but I don’t see any fangs.”
God help him, he’d show her some fangs. “I said I was a vampire. Now finish untying me.”
Mirren twisted his wrists and felt the rope give way—the woman had gotten it loose enough that he didn’t need her help.
“But wait, how do I know you—”
She gasped as Mirren pulled his wrists apart, popped the rope onto the cell floor, and shifted around to face her.
“Can you…?” She paused and swallowed hard, edging away from him on the bench. Mirren’s gaze dropped to her mouth. “Can you feed without killing me?”
Mirren nodded slowly. Maybe. Maybe not.

October 30 Guest blog (review Oct 29)
Tynga's Reviews
http://www.tyngasreviews.com
We have a feature called "When I'm not writing" on our blog (which I've mentioned in previous emails), in which authors talk about their life away from writing. It runs every Tuesday on the blog. Previous participants have posted on music, hobbies, pets, travel, and more. You can read more about it in the inaugural post or check out previous guest posts.

An odd twist on a vampire novel with a kind of post-apocalyptic vibe.  A human illness that had to be vaccinated against resulted in human blood that was poisonous to vampires.  But one place has become a haven for vamps.

It’s also a romance story.  And  despite being book two in the series, it can be read as a stand alone.

a Rafflecopter giveaway
Posted by Wall at 3:37 AM