Book Review of Riverwalker
Sponsored by Pump Up Your Book

RIVERWALKER features the character debut of San Antonio PD veteran detective Gifford Holloway, a former Special Agent with Army Intelligence.  Holloway is in pursuit of the most despicable of criminals, a savage murderer who victimizes children and dumps their remains in the water and along the banks of San Antonio’s beautiful and world-renowned Riverwalk attraction.
Frustrated at the lack of progress on the case and spurred on by an encounter with the mysterious Madame Candelaria, a local psychic, Holloway contemplates calling upon his special gift of “seeing”, though officially off-limits within the SAPD, to help solve the case and end the terror.  Along the way, Holloway finds an ally in the capable and sensuous newspaper reporter, Salma Veramendi, who carries her own history of abuse
On the bend of the river looms Adler’s Antiques, a historical landmark owned and operated by Wolff Adler, a drug-pumping psychopath descended from a familial line of predators dating back to post-World War I Germany.   Himself a victim of horrendous child abuse, Adler is the offspring of a Nazi father and a Mexican bruja, a witch who practiced the “old” religion.  Operating from deep within his secret lair beneath the Alamo, San Antonio’s most recognizable and sacred shrine, Adler assumes the guise of Tlaloc, Aztec god of storm, thunder, and … child sacrifice.  Adler’s demonic reign of terror, acting upon a distorted internal belief system - a synthesis of Norse mythology and ancient Aztec practices – has a stranglehold on the residents of San Antonio.   Wolff Adler has become the RiverWalker.
When his own daughter is suddenly abducted, Holloway pulls out all the stops and, with Salma by his side, closes in on the killer in a gripping climax. 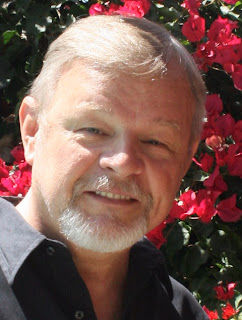 Bud Bradshaw’s fictional work, “RIVERWALKER,” is his second work, the first being “BRANDISHING,” the true-crime story of the California Highway Patrol’s worst tragedy.  His previous formal writing experience consisted of med-legal report writing - chiefly as a Qualified Medical Evaluator and Disability Evaluator – and Intelligence report writing while he served as a Special Agent with the Army’s 109th MI Group from 1969-71.
As an artist, Bradshaw’s work focuses on military history and the American West.  Many of his paintings, prints, and Giclees appear in private collections and museums in the U.S., Canada, England, Europe, Hong Kong, and Australia. He is a member of the Western Artists of America.
Along the way, Bradshaw worked as a professional musician while earning his B.S. and D.C. degrees.

You may view his web site and blog at budbradshaw.com/blog
Purchase the e-book at Amazon

This is an excellent book with an enticing mystery that kept me spellbound.  As a warning the subject is child murder and there are many disturbing scenes that will be difficult for some people.  Fascinating blend of Aztec, pagan, and other myths.

I give this 4 out of 5 clouds due to the difficult nature of the topic.

This product or book may have been distributed for review; this in no way affects my opinions or reviews.
Posted by Wall at 5:06 AM