Book Review of The Unholy 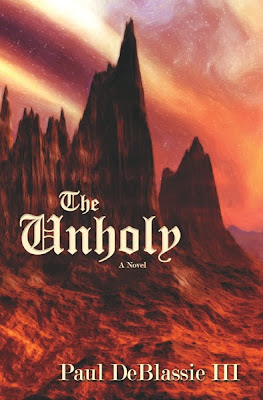 Publisher: Sunstone Press (October, 2013)
Category: New Age Fiction/Metaphysical Thriller, Paranormal Thriller
Tour Date: April & May 2015
Available in: Print & ebook,  203 Pages
A young curandera, a medicine woman, intent on uncovering the secrets of her past is forced into a life-and-death battle against an evil Archbishop. Set in the mystic land of Aztlan, "The Unholy" is a novel of destiny as healer and slayer.
Native lore of dreams and visions, shape changing, and natural magic work to spin a neo-gothic web in which sadness and mystery lure the unsuspecting into a twilight realm of discovery and decision.
Praise for 'The Unholy':
"The imagery throughout is amazing and I love the writing style.  The plot kept me engaged throughout and the backstory is intricate and makes you think.  This is a relatively quick read but I would suggest starting when you've got time to invest.  Because you won't want to put it down once you pick it up!
"-Shana, The Bookie Monster

"The mystical novel, 'The Unholy' by Paul DeBlassie III is jam packed with native folklore, dreams and magic coming from all directions, which lead to the sadness and mystery that lures Claire, the heroine of the story, into a realm of discovery. The narrative of this book is fast paced and easy to read.
Claire is a strong female character, who has to not only fight against others, but also herself. There are so many components that made this novel unique, such as the setting of Aztlan, the Native American beliefs, religion, magic, and the overwhelming dark forces present. DeBlassie succeeds at telling a riveting story with an inventive narrative that carefully intertwines cultural and romantic elements into the good vs. evil fight, which pulsates throughout all the pages of the book."-Red City Review

"The theme of the novel is pretty basic, good vs. evil. But the author takes that theme, twists it around, comes up with intriguing characters who often walk the balance between right and wrong, and takes things to a whole new level. There's action, suspense, a hint of romance, and definitely enough darkness to share around in this book.
The writing style is very descriptive, almost poetic. Intruiging."-Majanka, I Heart Reading

"A new take on the classic good versus evil,  The Unholy is well written and will leave you wanting more. I was intrigued by the native lore that was used to develop the story, and also on how strong of a hold the Archbishop has on the people of the town - his fear and power is overwhelming. I really enjoyed the story and how the characters prepared for what was to come."-Tracee, Review From Here

"This is really a very good read but I have to warn you it's really dark. It reminded me of watching a movie where it is overcast, gloomy, a bit foggy and there are crows and ravens around. Well this had all that plus a psychiatric hospital, ancient and mystical powers, a cult, and unknown forces at work.
There is a sinister feeling that hangs over you as you read through this captivating story. It is really well written and so vivid, I had such a clear sense of where this all took place. The characters were very well done. The evil person is really dark and warped and creepy.
As I said this is quite a dark story but it is well told and a really good read. The very first chapter draws you into this story and will keep you reading to see whether good or evil wins. I definitely recommend it."-Maggie Thom, Author of  'The Caspian Wine Series'

PAUL DeBLASSIE III, PhD, is a psychologist and writer living in his native New Mexico. A member of the Depth Psychology Alliance, the Transpersonal Psychology Association, and the International Association for Relational Psychoanalysis and Psychotherapy, he has for over thirty years treated survivors of the dark side of religion.
Website: http://www.pauldeblassieiii.com

I want to shed a little more light on the plight and terror of  Claire Sanchez, curandera, medicine woman, protagonist in The Unholy. As a young child, she witnessed her mother’s brutal murder in the nighttime forest of Aztlan at the hands of a black-robed man. Hiding behind the tress, Claire, a five-year-old girl, was powerless to help. This nightmare haunted her waking life and dreams for twenty-five years. Day and night, she feared fulfilling her destiny as a medicine woman. Her mother died because of who she was. Terrible fright dominated her life.

The black-robed man could find her and do what he had done to her mother. Death lurked around every corner of Aztlan. Religion, she came to discover, cloaked many a sordid deed and foul personage. There was no way she could continue to run. What she most feared came her way, discovered her whereabouts, what her life was about and was to become, and who she loved. The time came for her to decide. Decisions of life-long consequence are painful, agonizing. Nevertheless, she, I feel, did not regret the decision she made. She had to face the ghost of her past or forever be haunted by nightmares of what might come and what she could have done differently. She was not one to be indecisive.

It was all a matter of timing. Yes, it was violent. Yes, the world of the supernatural and natural collided and forever changed the lives of so many people; but, she would not have it any other way. She needed to be true to her life, destiny, to herself as a woman who could run no longer. She could no longer cling to old ways and crippling terrors that needed to be confronted. She did what she had to do and for that she was satisfied and complete. To all who read, she would send courage as you confront the dark side of religion and a woman’s quest to discover self, destiny, and whether, because of the scarring of her past, she could ever love again.
Unholy  Web Tour Schedule

Interesting story combining religious zealots and Native American mythology.  The story is tense and mysterious, but do not read if you have issues with problems in religious organizations.