Book Review of The Twiceborn Queen 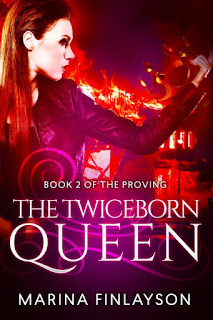 Kate O’Connor’s had a rough week. Thrown into the middle of a war of succession between the daughters of the dragon queen, her introduction to the hidden world of the shifters almost proved fatal. Now, because of Kate and her new powers, that hidden realm has been revealed to the world, which hasn’t exactly won Kate any popularity contests.

Still, it’s not all bad news. After all, it’s not every day someone you love comes back from the dead. Throw in a hot new boyfriend, and suddenly Kate’s got a lot to live for—which is bad timing, because now the queen’s set a bounty on her head and every shifter in Sydney is trying to collect it.

Kate may have defeated a dragon already, but there are plenty more where that one came from. As her enemies close in and the body count mounts, Kate begins a desperate search for allies. The deadly game of the proving continues. If Kate is to save the people she loves, failure is not an option. The rules are simple: win or die.

The Twiceborn Queen is
the second book in the urban fantasy trilogy The Proving.

Marina Finlayson is a reformed wedding organist who now writes fantasy. She is married and shares her Sydney home with three kids, a large collection of dragon statues and one very stupid dog with a death wish.

Book Excerpts
We stood in front of Elizabeth’s massive mahogany desk like naughty children called before the headmistress. It was impossible to think of her as our mother. Dragons didn’t do motherhood, not in the way that humans and other shifters understood it.

Her cold blue gaze travelled across each of us in turn. By coincidence, or perhaps unconsciously, we’d lined up in order, oldest to youngest. Valeria stood with her arms folded across her blood-spattered chest, chin lifted in challenge. That pale blue satin would never be the same again. Most people would trash it, but it wouldn’t surprise me if she kept it as a souvenir of her first kill. Because, despite her denials, I was one hundred per cent certain she was responsible for the bomb blast.

Next to her stood Alicia, her stark black-and-white ball gown still pristine. She’d been way across the other side of the room when the bomb went off. Ingrid, closest to me in age, was next in line and similarly unruffled. Now that Monique was dead, she was the only brunette among us. I looked a wreck compared to her, with a scrape across my cheek and raw patches on my hands and elbows where I’d been thrown to the stone flagging of the terrace. My chiffon skirts were sadly torn but I’d had a lucky escape, thanks to Luce’s quick reactions. 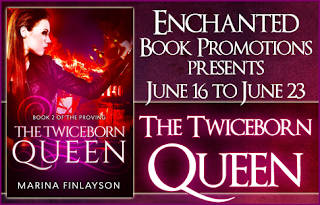 Monique, who should have been standing on my other side, hadn’t been so lucky. It was her blood that stained Valeria’s dress and coated the broken walls and floor of the throne room. Plus a few other people’s outfits, which were going to need epic dry-cleaning. There wasn’t much else left of our youngest sister, and Elizabeth was seriously unamused.

Oh, not because Monique was dead. We were expected to kill each other off. Last woman standing got to inherit our dearest mother’s throne. She just didn’t appreciate the battle beginning in her own throne room, with such destructive results. Not to mention the possible risk to her precious person.

An ornate grandfather clock in the corner ticked solemnly as Elizabeth let the silence lengthen, each swing of its massive pendulum reproaching us for disturbing the peace of the queen’s domain. I stared down at the carpet beneath our feet, following the intricate swirls and flowers of its design, and tried not to draw our mother’s attention. She disliked me enough already.

“The Presentation Ball is intended to introduce the candidates to the domain,” she said at last, her voice as icy as her gaze. “It is not meant to host the outbreak of hostilities. Such breaches of etiquette are not to be tolerated.”

Trust Elizabeth to label the murder of one of her own daughters as a “breach of etiquette”.