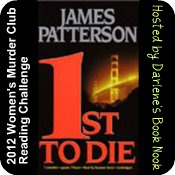 I read the first two books in the series this year, and I want to continue on in the series. Since I could not find anyone else hosting this challenge, I thought I would give it a whirl!

The books in the Women's Murder Club series by James Patterson are:


Please read below for the challenge guidelines.

Here are the challenge details:

2. You can join the challenge at any time, whether you haven't yet started the series or are already halfway through. All books read in 2012 count for the challenge, regardless of when you sign up.

3. This challenge can cross-over to your other reading challenges.

4. You do not need a blog to participate! If you are not a blogger, you can post your reviews at Goodreads, Shelfari, or LibraryThing and link them up here.

5. All formats of books are acceptable: Bound copies, e-books, and audiobooks (as long as they are unabridged).

6. There are four levels for the challenge:

7. When you write your sign-up post, you must choose your level. You can go up, but you cannot go down!

8. There will be link-ups for your reviews on a quarterly basis, which will be posted on THIS page.

9. There will be a link for your wrap-up post at the end of the year.

Blood: The new Red begins at an after party where Mickey, and ex-adult movie star turned supermodel, is aligning himself with one of top Designers of Seventh Avenue. While trying to land a job on the runway Mickey is thrown into the center of a scene where sex is often the motivation, the wine is served by year, and cocaine is back in full force. Juanita, Mickey’s girlfriend is having difficulties staying sober, fully clothed, and off of her famous boyfriend.

Mickey goes to work for Fashion icon Paul Johnson, one of the two top Designers in NYC. The other is Sandy Johnson, another Designer who will stop at nothing including murder to guarantee victory. A runway exhibition has been scheduled for the two to compete in and find out who truly is the best Johnson. Mickey will be Paul’s top model, and Sandy has found a homeless person nicknamed Kung Fu Master to show his line.

In addition to getting his new line in place, Paul Johnson is also buying chain saws, the louder the better, to put the special in this special event.

Did you know that you can’t be sentenced to prison if actively seeking help at a mental facility? Paul Johnson knows this.

Somewhere between the girls, counting Vicodin pills, and show preparation Mickey has grown a conscience and no longer likes what he sees. He believes (and his psychiatrist agrees) that he has the power to change what’s happening around him.

Days before the show Kung Fu Master turns up dead and there is an attempt on Mickey’s life. After a brief period of unconsciousness Mickey is back, is told that Juanita and brother Cheeks are now also dead and that he must continue with the show. After all, what would Steven Tyler do?

The night of the show is laced with celebrities and models on the runway as well as one particular popular day-time talk show host that may or may not be murdered on the runway.

In the end only one Johnson will walk away, although this is temporary as Mickey has the last word.

Right before he pops his last Vicodin.

When I originally agreed to review this book I thought it might be a dark comedy along the lines of the movies like War of the Roses or Sue Grafton novels.  However, this turned out to be more of a farce, tongue in cheek story with humor reminiscent of comic books turned movies like Dick Tracey.  The story is a sarcastic, campy tale of the fashion world at it's more absurd, with rampant drug use, ridiculous fashion designers and designs, and over the top characters in unbelievable situations.  It was a fast, funny read if taken as the farce it is.  If you are looking for a story with depth of character, believable story line, and real life situations, skip this book.  If you want a light, fantastical read where belief is suspended, then this is the story for you.

I received both an e-copy and a paperback copy of this book.  I have received an updated e-copy and the spelling and grammatical errors were corrected.  The rest of the review remains the same.

Furthermore, I found the writing to be banal and replete with cliched situations, such as characters sniffing crack off the hookers bare breast.  When I first read the blurb on this book I thought it would be a somewhat serious mystery, but this book was cliched and cartoonish.  This is not a book I would choose in a book store where I would have perused the pages.  It is possible that I did not enjoy it due to the misconception of the type of book it would be and the fact that this is not my typical choice of fare.  For fans of cartoonish, dark humor this would probably be a good read, but it is not my cup of tea.  I give it 2 of 5 clouds.
Posted by Wall at 9:16 AM 1 comments