Cover Reveal for Give Me A Reason

BLURB:
Vivienne Callahan has known only hardship. As if growing up with an alcoholic, drug addicted mother wasn’t traumatic enough, she’s escaped from her physically and verbally abusive boyfriend only to struggle every day to make ends meet as a waitress in a Minneapolis diner.

Along comes Mikah Blake, a handsome stranger who quickly takes an unexpected and persistent interest in her. On the surface, “Mr. Suit” seems to be Vivienne’s opposite: rich, well-fed, successful. As Vivienne will learn, Mikah is more than he seems, and for reasons unknown, he’s determined to be her knight in shining armor. But after having finally found her own two feet after years of abuse, it’s difficult for her to accept Mikah’s help.

Will her body’s unexpected response to Mikah’s touch be reason enough to overcome her pride and traumatic past and learn to love and trust? Or will her past, refusing to be left behind, come back to claim her?

It is from Glendale, Arizona that Zoey Derrick, a mortgage underwriter by day and romance and erotica novelist by night, writes stories as hot as the desert sun itself. It is this passion that drips off of her work, bringing excitement to anyone who enjoys a good and sensual love story.
Not only does she aim to take her readers on an erotic dance that lasts the night, it allows her to empty her mind of stories we all wish were true. Her stories are hopeful yet true to life, skillfully avoiding melodrama and the unrealistic, bringing her gripping Erotica only closer to the heart of those that dare dipping into it.

The intimacy of her fantasies that she shares with her readers is thrilling and encouraging, climactic yet full of suspense. She is a loving mistress, up for anything, of which any reader is doomed to return to again and again.

Come back on September 25 for my review of this book.

This product or book may have been distributed for review; this in no way affects my opinions or reviews.
Posted by Wall at 9:14 AM 0 comments 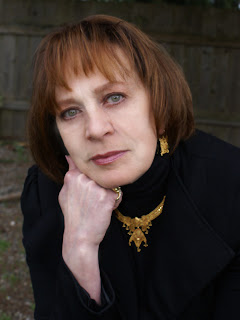