Giveaway and Book Review of Cargo 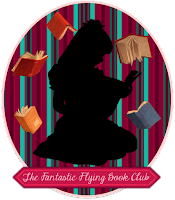 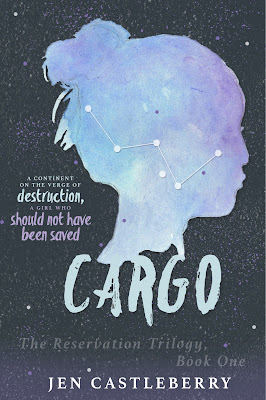 The earth has been reduced to a singular continent, governed by extra-terrestrials, collapsed by nuclear weapons residue and wracked with radiation sickness. Only one viable territory remains, and access there is restricted by a mysterious selection process. Everyone hopes to be chosen for transport. Everyone but Cass.

Seventeen year old Cassidy Hartinger has spent the past eleven years living in a government-maintained bunker. She should be thrilled when a handsome transporter arrives to take her to the Reservation. So why does she feel like he's dragging her, kicking and screaming, straight into the anti-paradise?

Faced with gun-wielding survivalists and elemental catastrophes, will Cass make it more than two steps out of the bunker? Will her journey to peace and safety in the Reservation turn out to be the most perilous thing she's encountered so far?

Fast-paced action and a tumultuous teenage romance will keep readers begging for more installments of The Reservation Trilogy!

Jen Castleberry is a North Carolina native currently based in Virginia Beach, VA. She is a Communications graduate and proud ECU alum.

When she's not writing, Castleberry works full-time as a Veterinary Assistant at a local animal shelter. 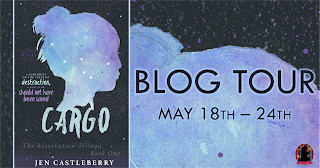 Her affection for all critters, large and small, comes home with her at the end of each day. She frequently lends her house and heart to homeless animals in need of foster.

Her own clan of silly creatures include an Akita, a Basset Hound, a Maine Coon, and of course, her active-duty husband.

At twenty-seven, Castleberry hopes to soon realize a life-long dream of writing professionally.

The first installment of her YA debut series premiered in January of 2016. 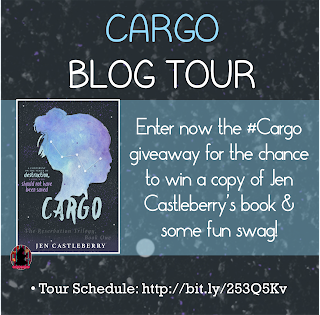 Sort of a cross between a dystopian and post-apocalyptic story, this story has a unique view of humans and the value of people.  The story can be disturbing in the lack of humanization, but it shows a particular fear of a possible future.  The story is told from the point of view of Cassidy, but the way other view her is shown in her reactions and what occurs.

Some parts of the story can be difficult to follow, but the overall story arc is fascinating.  I look forward to the next book. 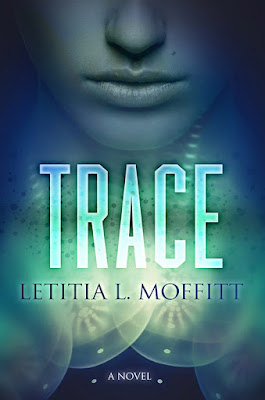 She knows what happens when you die.

Nola Lantry is a tracist: she can sense the particles of energy that are released when the human body expires. It’s a somewhat gruesome ability, but Nola uses it to bring some meaning to her otherwise drab life in upstate New York by assisting the Redfort Police Department on missing person cases. When the richest man in town, Culver Bryant, disappears, Nola finds herself in the middle of a case that is both baffling and increasingly dangerous, the danger appearing in the form of death threats as well as the missing man’s brother, Grayson. Does Grayson Bryant pursue Nola to seduce her or to stop her—and why does Nola feel a connection with him despite her mistrust? 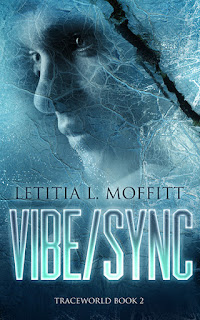 Barely a week has passed since she solved her last case and Nola Lantri is already involved in several new mysteries—with a couple of people who may be just as unusual as Nola herself.

Eric Lafferty has returned to Redfort City a little too late for his father’s funeral but just in time to get mixed-up in a mystery that involves Nola Lantri, Grayson Bryant, a dead girl and a missing woman. Eric’s ability to read the vibrational changes in brain waves should be an asset, yet it only seems to make life more difficult for him—and given that he and Nola might be the next victims, things are difficult enough.

Emjay used to steal things—nothing big, just enough to get by—but after a terrible accident changes her life, Emjay has only one thing on her mind: revenge. Suddenly private investigator Nola Lantri appears and questions Emjay about her past—and informs her that the mysterious man she works for has a complicated past of his own. Emjay must figure out the best use of her odd ability to “sync,” a technique intended to help people heal—but one that also can cause a lot of harm. 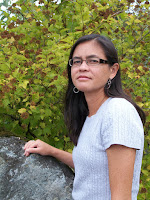 Letitia L. Moffitt was born and raised in Hawaii. She received a doctoral degree in English/Creative Writing from Binghamton University. Her first novel, Sidewalk Dancing, was published by Atticus Books in November 2013. Her novel Trace—Book 1 of the TraceWorld series—was published by Cantraip Press in March 2015. Vibe/Sync, Book 2 of the series, will be released by Cantraip Press in April 2016. In her spare time Moffitt runs ultramarathons and blogs about her experiences at http://letitiamoffitt.blogspot.com. 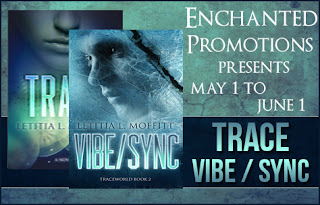