Giveaway and Book Review of For the Love of Hades: Loves of Olympus, Book 2

Giveaway and Book Review of For the Love of Hades: Loves of Olympus, Book 2
Sponsored by Bewitching Book Tours

For the Love of Hades
Loves of Olympus, Book 2
Sasha Summers 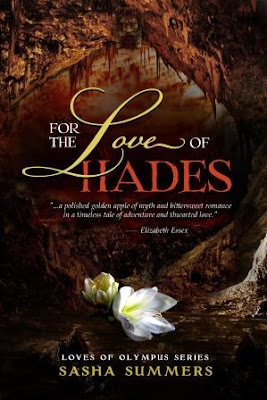 Hades, the Lord of the Underworld, has no patience for living things or his Olympian brethren. His purpose is order, administering justice to those who enter his realm, and keeping the balance decreed by the Fates. Meeting Persephone sways his focus, her gentle sweetness threatening his control. But he will not be tempted.

Poseidon’s scheming wreaks havoc upon Persephone. Hades has no choice - he must rescue her.

Hades awakens something within the Goddess Persephone. She feels no fear from his brooding presence. In truth, she’s never felt so alive. Every stolen moment together only confirms her instinct: he is meant to be hers. Such a powerful union suit will face opposition – from Olympus, her troubled betrothed, the Fates, even Hades himself – but she is determined to win his heart.

Tagline: Hades, God of Death, has no heart. Persephone is determined to prove otherwise…

It's said love can change a person. Medusa wasn't always a monster...

Medusa is ruled by duty, to her Titan father and the Goddess Athena. She's no room for the tenderness her warrior guard, Ariston, stirs. When Olympus frees her from service, her heart leads her into the arms of the guard she loves... and curses her as the creature with serpent locks.

Ariston goes to war with a full heart... and dreadful foreboding. He learns too late of the danger Medusa faces, alone, and a Persian blade sends him into the Underworld. But death, curses, nor the wrath of the Gods will keep him from returning to her.

Sasha Summers is part gypsy. Her passions have always been storytelling, history, and travel. It's no surprise that her books visit times past, set in places rich with legends and myth. Her first play, 'Greek Gods and Goddesses' (original title, right?), was written for her Girl Scout troupe.

She's been writing ever since. She loves getting lost in the worlds and characters she creates; even if she frequently forgets to run the dishwasher or wash socks when she's doing so. Luckily, her four brilliant children and hero-inspiring hubby are super understanding and supportive.

Sasha is an active member of RWA and several Texas Chapters. A self-proclaimed movie-addict, she is full of all sorts of useless movie tidbits and trivia.

"This tragic and beautiful retelling of one of the world's oldest stories tackles the eternal battle between duty and happiness. Medusa, A Love Story broke my heart then filled in the cracks with joy. Sasha Summers is simply a mesmerizing new talent."  ~Stephanie Dray, Author of the critically acclaimed Song of the Nile

Her feet reached the ground, but she did not want to release him. His hands remained, steadying her. It would take no effort to kiss him. He held her already. All she need do was raise up on her tiptoe–
Orphnaeus’ head descended between them, his nose butting against Hades’ chest to reach the apple pressed between them. His teeth plucked the red apple from her hand, piercing its skin and crushing it in seconds. Juice spattered her hand and arm, making her burst into laughter.
Hades laughed too, his fingers brushing the fruit pulp from her arm and cheek.
“He is a brute after all,” she said, shaking the bits of apple from her fingers.
Hades smoothed a curl from her shoulder, his face growing remote once more. He lifted his hand and she drew in breath. She knew he would kiss her. He would draw her close, he wanted too. She could see it in his eyes, in the rigid set of his jaw–
Orphnaeus butted her between the shoulders, snorting.
“One is not enough.” Hades stepped back, reaching for another apple and plucking it with ease. She offered it to the horse, who gobbled it down and snorted indignantly into her empty hand.
Hades picked more, and the two fed the horse in companionable silence. Yet all the while, Persephone savored the memory of Hades’ thighs pressed against hers, the strength of his chest against her back… And quivered with some nameless sensation.
He offered her another apple, but Orphnaeus seemed content.
She brought the bright skinned fruit to her lips. “It should not go to waste.”
The strangest expression settled over him. His eyes widened, then narrowed. His mouth opened, then pressed tightly closed. When the skin of the fruit met her lips, he knocked it free.
The fruit tumbled to the ground and Orphnaeus devoured it.
Persephone stared at Hades. “Hades–”
“You cannot eat the food of the Underworld,” Hades snapped, running a hand through his thick black hair. His eyes flashed as he glared down at her. “Never. Do you understand?”
She nodded, her mind reeling with confusion. “But–”
“No,” he shook his head, his hands clasping her upper arms. “You must not. I fear the consequences of such a thing.”
“’Tis an apple,” she protested.
His mouth twitched, but his fingers tightened about her arms. “An apple grown here, in the realm of the Dead. It is by the Fates’ decree…”
She touched his cheek. “Peace, Hades. I will not eat. I need no more explanation than that.”
But she wondered at the wariness upon his face as he urged them to return to his home.
Giveaway:

one signed paperback set of Medusa and Hades (USA/Canada only)

I love the way that the author takes Greek myths that we all know and changes them so that you have to look at the story in a new way.  I loved Medusa and the story of Hades and Persephone is equally enthralling.

Sasha Summers story is sweet, romantic, happy, sad, and a joy to read.  I was brought to tears, but ultimately left feeling that love can overcome any barrier.

They say college is a lot of things; a haven, a four-year party, the place you met the girl – or guy – of your dreams. What they don’t tell you is, the best part of college is the drama YOU bring to the table! After all, that dirty little secret, that not-so-little white lie, and those texts you wish you could erase from cyberspace can’t stay hidden forever. At CU, someone’s always watching, and you better hope there isn’t a camera phone on hand when you get caught.

It’s the Spring Semester, but it’s not all fun in the budding sun for Jon and Franz. Follow them as they delve through the politics of secret societies, the inevitable drama of the F-word (that’s FAMILY, for the uninitiated), creepy Resident Advisors, creepier residents and girls who don’t always say what they mean. Who wouldn’t need two months to recuperate?

Etta King is the author of the Caspian University novels, a series chronicling the life and times of a group of wealthy teens who inevitably discover the various flavors of college drama. Etta writes from her personal experiences as a college co-ed and as the product of an all-girls prep school. Here she witnessed the very eccentricities and foibles which she depicts in her novels.

In a home filled with books, it was no surprise that Etta grew to be an avid reader, and that translated into writing when she was thirteen. She wrote simply for the fun of it, whatever would come to mind, from fantasy to thriller to romance, and shared her stories with her friends.

In 2010, at twenty-one and just as she was about to graduate from college, Etta began writing "The Life and Times of Elizabeth and the Duchess." This was a story which had first taken shape in 2008, after her freshman year, but had been put on hold. With graduation looming, Etta recalled the characters, and the events which had inspired them, and took pen to paper. Literally, as Etta enjoys writing out her stories before typing them out. Soon the first book had been completed and the series was born.

"The Life and Times of the Heir and the Keeper," comes as the sequel to "Elizabeth and the Duchess," and serves as the second semester of these teens' college saga. Etta is currently working on the third book, in what will be an eight-part series.

Etta King lives with her family in Westchester, New York.

Preview…
The Life and Times of the Heir and the Keeper

Chapter One
All the kings’ horses and all the kings’ men…
Jonathan
Wasn’t a guy supposed to stay away from his best friend’s girlfriend? In a perfect world, there’d be a strictly enforced penalty for breaking this Golden Rule. Like a five year sentence spent watching a stream of commercial-free Lifetime Original movies. That sounded sufficiently horrible. I contemplated this appropriate punishment while watching Chadwick act as ski tutor extraordinaire to Elizabeth. My girlfriend. I should be doing that, but here I was, counting fur balls on my socks, in our cabin, with a sprained ankle. Sure, Chad’s ‘friend’ was with me, and had actually been attentive and kindly for all of ten minutes. But then she was also complaining non-stop about how Chad was “such an ass” for dragging her up here, only to abandon her with his friend. “No offense.” None taken. I myself was thinking the same thing about my friend who’d been giving me strange looks since Elizabeth and I arrived.

This book jumps from one person’s perspective to another’s.  Since I didn’t read book one, I had to keep looking back at the list of characters to remind myself who was whom.  This made it difficult to maintain the continuity of the story.  There are also several different story lines going on at the same time.

The author does an incredible job of keeping the stories straight and yet intertwined.  I enjoyed getting to know the cast of characters and look forward to reading more about them in the future.

This product or book may have been distributed for review; this in no way affects my opinions or reviews.
Posted by Wall at 5:27 AM 0 comments