Excerpt and Book Review of Slumber 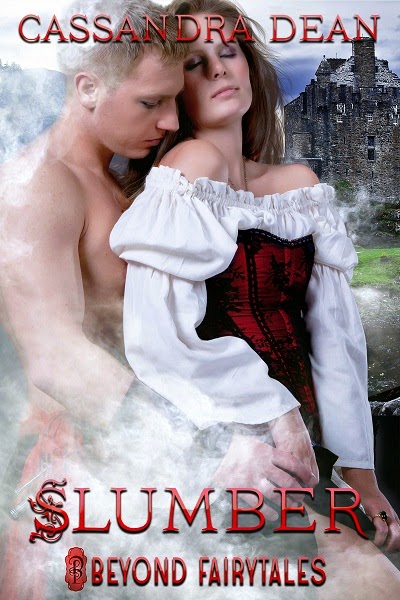 The Tailor has been tasked to find the princess…
Upon decree from his king, Sebastian, Tailor to the entire kingdom of Dormiraa, embarks on the mission to fetch the Princess Thalia home, her seven year Royal Tour over. He didn’t expect to find her working with clockwork and gears, encased within a coffin of glass. He did not expect the sight of her wild black hair to set his heart to pound, or the flash of her dark eyes would heat his blood. He did not expect he would want her so badly, not when he could never have her.

The princess must become the Queen…

Thalia has always known she must return to the capital to prepare for the throne. She did not expect her father to send the Tailor to fetch her, or that this man with his extravagant clothes and subtle cosmetics would intrigue her so well. There was something about him, something that spoke of danger and secrets, even as his wicked mouth and knowing eyes made her yearn.

However, not everyone desires the princess’s return. When they are attacked, they can only turn to each other. Will they overcome status and secrets to discover a love for all time?

Cassandra Dean is a best-selling, multi-published author of historical and fantasy romance. Her latest novel, SLUMBER, is part of Decadent Publishing’s Beyond Fairytales and features Cassandra’s take on Sleeping Beauty. Her next novel, SILK & SCARS, is part of her popular Silk Series, featuring Victorian Era lawyers and their happily ever after.

Cassandra is proud to call South Australia her home, where she regularly cheers on her AFL football team and creates her next tale.

Giveaway for an eBook copy of one of the books from the author’s backlist on Decadent Publishing, a signed Slumber post card and a magnet.

The discordant note of a missed strike sounded rose from the coffin, followed by a terse mutter. By the Maiden, was the princess cursing?

A sudden, terrible thought occurred. Was it the princess? Surely she wouldn’t curse as if she were a dockworker Maybe it was his source had lied about the gear worker being the lost princess. Maybe this wasn’t her at all, and he would spend another three months trying to find the erstwhile royal.

No. If it killed him, this would be her. He was not going to waste any more time on this.

So decided, he intoned, “Princess,” in the clear, strong voice he used to quell conversation.

The woman in the coffin—the princess, damn his eyes—started, and a loud clang split the air, immediately followed by one of those deliciously vulgar curses. Pulling out of the coffin, she glared at him. 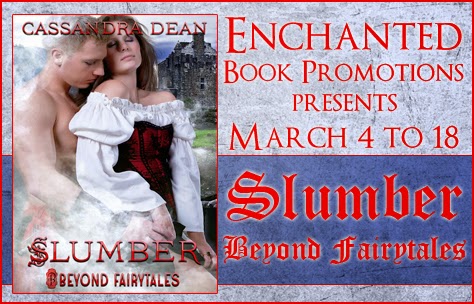 His breath strangled in his throat. Heat stormed through him, his cock hardening in his too-thin breeches.

Thrice-damned god, but she was arresting.

Wild ebony hair escaped from the band holding it back while furious black eyes pilloried him, full lips pursed in displeasure. Her worker’s clothes revealed more of her form than they should, the homespun shirt opened to the middle of her breast bone. The undyed fabric seemed too rough for such fine skin, the dull, off-white hue a contrast with her dusky flesh. The brown leather harness of her trade nipped in her waist and cupped her breasts, while trousers outlined full hips and long legs, the latter encased in knee-high boots of soft brown leather capped with steel.

Quite insanely, he wanted to taste the damp skin revealed by her shirt.

“What do you think you’re doing?” she demanded.

She had to be the princess. Only royalty could deal such a stare.

She folded her arms beneath her breasts. He tried not to notice how her action plumped her flesh deliciously through the leather. “Do not come into a workroom and startle a gear worker, especially if she’s wielding tools that could harm her, the object she works on, and your fat head once she recovers herself.”

“My apologies, Princess.” He offered his most charming smile and ignored how the darkening of her scowl made him harder. “I am the Tailor, and I have been sent to fetch you home.”

I am a huge fan of fairy tale retellings…when they are done as well as this one.  I have a special place in my heart for Cinderella or Sleeping Beauty style tales, but I have to confess I prefer a strong feminine heroine which is not always the case in those stories.  In this story the heroine is strong and knows what she wants, but also able to bend for love.  The dichotomy of the strength and frippery of the tailor add to the pleasure of this story.

I give this story 4.5 out of 5 clouds and strongly recommend it for the Good Reads Fairy Tale Retelling group.